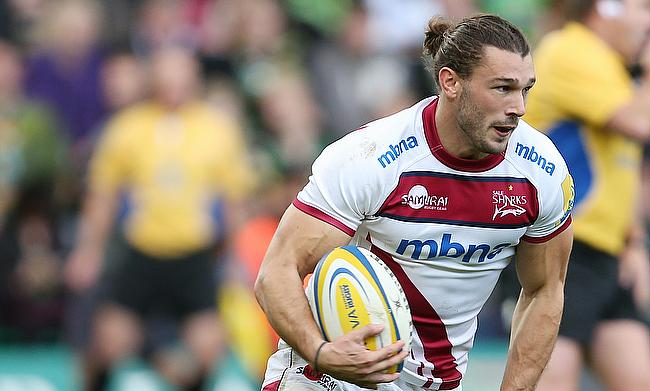 Sale Sharks began their Anglo-Welsh Cup 2016/17 campaign with a thrilling victory after edging out Wasps by 17-13 at Salford on Friday.

Josh Charnley made his debut for Sale Sharks after joining the club from Super League champions Wigan Warriors and was named on the bench.

Fly-half Connor Eastgate started the proceedings for Wasps with a penalty in the 14th minute but centre Mark Jennings responded with a try which was followed by the conversion from Tom Arscott as Sale Sharks took a four-point lead.

However, the lead lasted only 15 minutes as Guy Thompson's try took the scoreline to 7-8 in favour of Wasps at half time.

With assistance from Arscott, centre Sam Bedlow crossed the line to add the second try in the game for Sale Sharks. Fullback Arscott further added the extras and another penalty to take Steve Diamond's men to 17 points.

A desperate try from replacement Jacob Umaga in the 69th minute helped Wasps to reduce the gap but eventually succumbed to a four-point defeat with Sale Sharks tightening the defence at the closing stages. The win has taken Sale Sharks to the second position in Pool 2.

Sale Sharks rugby director Diamond was pleased with the victory.

"For a side that have just been put together - they've not been playing much as a team - I thought they did pretty well in what were atrocious conditions for most of the game," Diamond said.

"It wasn't the best spectacle but we just needed to win really.

"The maul went pretty well. Wasps are good at the breakdown so we couldn't get as much clean ball as we wanted but that's the way it goes sometimes."