Saints back to winning ways 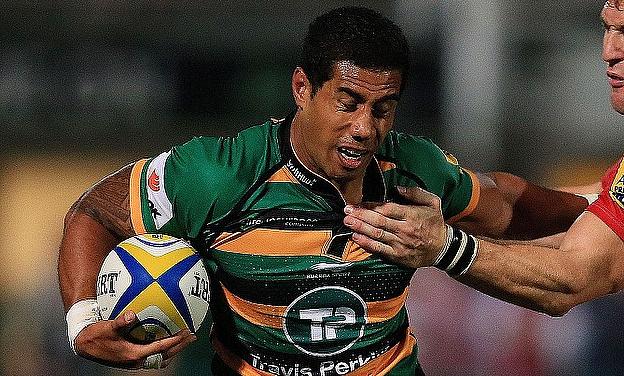 North sets the pace for Saints victory
TRU Exclusive with George North - 'Winning only makes it Harder'
Do the Saints have enough strength in depth?
Mallinder backs fixture compromise

Northampton returned to a winning formula in the Aviva Premiership with an emphatic 35-10 triumph over Newcastle Falcons.

Saints had been stunned by Wasps last weekend, going down 20-16 - but they delivered an immediate response at Kingston Park.

Tries from Will Hooley, Alex Waller and Ken Pisi helped the defending champions to a 28-3 lead at half-time, Juan Pablo Socino responding with a penalty for the Falcons.

Newcastle rallied in the second half with Noah Cato crossing the whitewash after quick thinking from Will Welch before George North secured a bonus point for the Saints.

The defeat stretched Newcastle's winless run to 19 games, with only Worcester and Rotherham having gone longer without tasting victory.

Northampton had suffered a blow in the build-up to the match with Tom Wood being forced to withdraw with a bad back, Jon Fisher replacing him in the starting XV for his first league start for the Saints.

It did not take long for the champions to find their stride with Hooley, starting in place of the injured Stephen Myler, spotting a gap in the Falcons' defence to stretch over in the corner after four minutes.

The fly-half added the extras and things went from bad to worse for the Falcons when Ally Hogg was sent to the sin-bin moments later for a tackle off the ball, Hooley converting the resulting penalty.

Saints looked to make the most of their man advantage and Luther Burrell almost capitalised on an interception but Falcons full-back Simon Hammersley managed to recover to snuff out the danger.

Hooley added another penalty after the hosts were penalised at the break down before prop Waller, Saints' hero in last season's final at Twickenham, crossed for the second try of the game in the 16th minute.

With the visitors deep in their own half, the ball was shipped wide to winger North, who made a mini break before offloading to Samu Manoa.

The American broke clear to feed Kahn Fotuali'I, who in turn passed to Waller - who saw off the attentions of two tacklers to burrow over and give Northampton an 18-0 lead.

Socino got the Falcons on the board with a penalty in the 18th minute but it was swiftly cancelled out by Hooley, before Northampton broke on the counter-attack to score their third try of the half.

Hammersley attempted a quick tap-and-go penalty for the home side but was quickly snuffed out by Courtney Lawes. Manoa took over possession and broke down the right before feeding Pisi to go over under the posts.

Newcastle rallied after the break and a kick to the corner saw a period of sustained pressure on the Northampton line but desperate defending from Jim Mallinder's men saw them force a penalty to emerge unscathed.

The hosts' improved performance would be rewarded on 70 minutes. Northampton were penalised at the break-down just outside their own 22 and a quick tap-and-go from Falcons captain Welch released Cato to streak clear under the posts, Socino converting.

However, Saints responded well to wrap up the bonus point in the final two minutes. Lee Dickson broke from midfield to take play deep into Newcastle territory and the ball was spread wide to North, who crossed in the corner - James Wilson adding the extras.