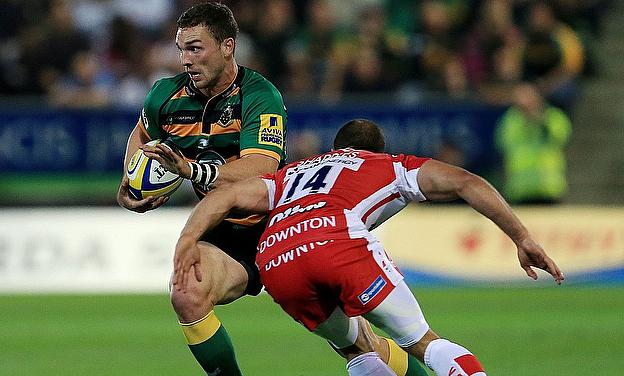 George North led the rout as Northampton opened their Aviva Premiership title defence by making a mockery of rebuilt Gloucester's optimism for the new season.

Saints were ruthless when in sight of the whitewash with George Pisi, Kahn Fotuali'i and Jon Fisher also crossing and Luther Burrell touching down twice, but it was North's night as Gloucester slumped to a record Premiership defeat.

Fly-half Stephen Myler contributed one penalty and converted four of the tries, outplaying opposite number and Gloucester debutant James Hook in the process.

Any suggestion of a hangover from last season's title heroics - Northampton's first league crown - was blown away in a highly-impressive start to the campaign.

While Saints made just one addition to their squad, it has been a summer of upheaval at Gloucester and their new-look coaching team headed by David Humphreys gave five players their debuts.

But instead of justifying pre-season claims they could challenge the top four, they fell spectacularly at the first hurdle and must hope they recover as quickly as possible.

Their scrum was supposed to have been strengthened by the summer arrival of John Afoa and Richard Hibbard, but they conceded a penalty at the opening set piece which Myler sent between the uprights.

It was honours even after the next scrum, however, and Hook kicked the three points to atone for Greg Laidlaw's earlier missed attempt at goal.

When referee Wayne Barnes blew his whistle once more, Northampton opted for touch and were rewarded with their first try.

Dylan Hartley crashed the ball up from the line out and Pisi switched left to exploit an exposed blindside with his rapid pass sending North over.

Franklin's Gardens shook when Samu Manoa flattened Billy Twelvetrees and Saints fans were brought to their feet again on the half hour mark when Pisi collected Myler's chip and strolled over with Myler converting.

Gloucester's defence opened up once again on the stroke of half-time with Pisi's run causing panic and when North took the ball it was over as he span and then side-stepped his way to a second try.

Any hopes the visitors had of staging a fightback evaporated just three minutes into the second half when full-back James Wilson raced through their ranks before supplying the scoring pass to Burrell.

North was irrepressible as he plundered Saints' fifth try, using his power to start the move before switching on the afterburners to finish it a couple of phases later.

Gloucester were suffering with the loss of Henry Trinder to the sin-bin and they leaked a sixth when they failed to deal with Myler's kick, allowing Fotuali'i to dart over from close range.

North made inroads again and the space created allowed substitute Jon Fisher to cross before Burrell struck the final blow by intercepting Ross Moriarty's pass and sprinting over unopposed.