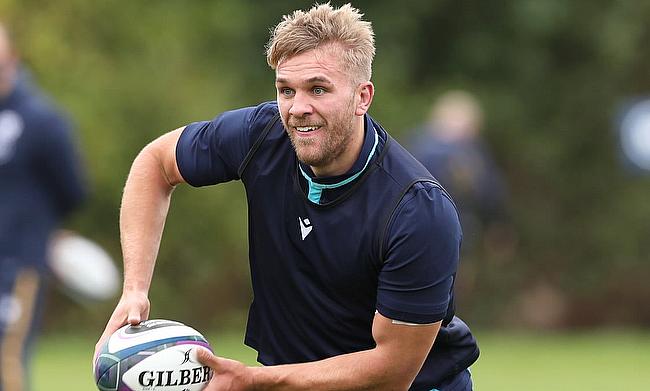 When Chris Harris made his second appearance for Scotland against a team in red shirts back in February 2018, it is fair to say things did not go so well.

However, fast forward just over three years months and the centre is preparing to play for a famous team who wear red rather than against one after his superb form for the Scots earned him a selection in the British & Irish Lions squad to travel to South Africa this summer.

In early 2018, Harris, now 30, was part of a Scotland team thumped 34-7 away by Wales in the Principality Stadium in the Six Nations.

Rightly or wrongly - probably the latter - Harris, who qualifies for Scotland through a grandmother, took a lot of flak for that loss and really had to prove himself to the Scottish supporters after that.

Prove himself he did and he quietly went about his business and began to make the number 13 jersey his own with performances built on solid defence and good leadership qualities.

Since Steve Tandy came on board as Scotland defence coach after the 2019 Rugby World Cup, Harris’ important role in the side has become even more evident and, although not a flashy player, more and more pundits have started to talk him up in recent months after the way he has played for his country and for club side, Gloucester.

A couple of months ago, many still considered him a ‘bolter’ for the Lions squad, but by Thursday lunchtime, a lot of people north of the border were quietly confident that the Carlisle-born midfield man would be in Warren Gatland’s 37-man squad, especially with his national team coaches Gregor Townsend and Tandy as part of the coaching panel.

“This selection is testament to his determination to make the most of his career and always improve,” Lions’ assistant coach Townsend told TRU.

“He has shown us time and time again why he plays international rugby for Scotland. He did not play in one of the World Cup warm-up matches in the summer of 2019, but then at training and in games, he forced his way into the starting team.

“Since then, he has been the number 13 for Scotland in 90 per cent of our games. In the last two years, the Scotland defence has been the best in the Six Nations - a lot of that is down to the work Steve [Tandy] does, but a lot of it is down to individuals and Chris has been excellent. Defending at 13 is a key position.

“Credit to him, he has shown what you can achieve and how you can bounce back due to adversity. We are delighted Chris has had the honour of being named in this squad.”

Pride of Gloucester: “I barely saw my name come up before the guys were on top of me!”

Before he announced the squad on Thursday, Lions chairman Jason Leonard said he had found out about his first ever selection for the famous touring team via Teletext.

Younger readers will not even know what Teletext is and nowadays, players find out the same time as all of us when they watch the live stream.

Some have talked about being at home with their partners peeking out from behind the couch and others wanted to be alone and sat in their cars watching it on their phones.

Harris was in the Gloucester team room during a training day when his name was read out and the former Newcastle Falcons man explained to GRTV: “We were all watching the squad announcement and I barely saw my name come up before the guys were on top of me!”

“It is pretty bizarre, to be honest. I really wasn’t expecting this. It is just crazy. It was really special and I am obviously delighted. I have worked hard to get to this point and I am just looking forward to getting out there and learning from all of the quality players who will be around me.

“It helps having Gregor and Steve there as well as a number of other Scottish players and I’m sure everyone will gel quickly.”

Eightsome reel: “For those selected, it will be a huge highlight”

Harris, who now has 28 Test caps, is one of eight Scots in the Lions squad and given the lack of representation from north of the border on recent tours, fans of the men in dark blue are delighted on the whole with that outcome.

Full-back Stuart Hogg is about to embark on a third tour while stand-off Finn Russell, who was a late addition in 2017, and newbies Ali Price, Duhan van der Merwe, Rory Sutherland, Zander Fagerson and Hamish Watson are also in.

“I am delighted for those guys,” Townsend said. "I know they will do really well on that Lions tour. I also have mixed emotions as I know players have missed out that I have close working relationships with, players I have worked with at club and international level.

“I have had the experience of being left out. I had the phone call in 2001 telling me I was not in the squad. It is a different way of finding out these days, but it will be tough for them. That is the biggest blow in my playing career so I know it will be hard for the guys that will miss out. For those selected, it will be a huge highlight.”