Quade Is Back! Australia Squad Ahead Of Championship Third Round 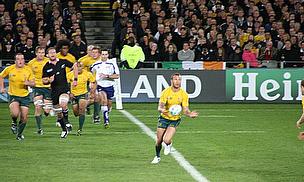 Ahead of the 2013 Rugby Championship’s looming third round, Australia make four changes to their team to face South Africa on Saturday night.

The most notable addition being the return of the enigmatic Quade Cooper, who starts in the number 10 jersey.

The Wallabies also move Israel Folau to fullback, in an attempt to add some spark to their attack which was seriously lacking against the All Blacks in the first two matches of the tournament.

Australia were comfortably despatched by the World Champions, both home and away. In the competition’s first game, the All Blacks thumped a lacking Australia, 47-29, away at the ANZ Stadium in Sydney.

A week later, the return fixture was a much closer game, but New Zealand still looked in charge in Wellington, with a final score of 27-16.

Talking Rugby Union’s Southern Hemisphere correspondent, Scotty Donaldson, commented on the selection choice: "Quade Cooper is the type of guy who can spark something but can also cost you matches so it will be interesting to see how things go.

"Obviously the Wallabies want to run the big Springbok forwards around and play at pace so it should make for an exciting game!"

Other additions to the line-up are Sekope Kepu, who come into the front row, while Nick Cummins is brought onto the right wing.

There will be obvious disappointment for both Matt Toomua and Jesse Mogg, who have struggled to add any spark to the side in the previous two games. However, it does show a serious lack of options for Coach Ewen McKenzie.

Are these changes good for Australia?

Scotty believes that "the jury is still out on the Quade Cooper decision; however, the Wallabies are desperate for some variety in attack."

Australian team for the Rugby Championship’s third round to play South Africa: