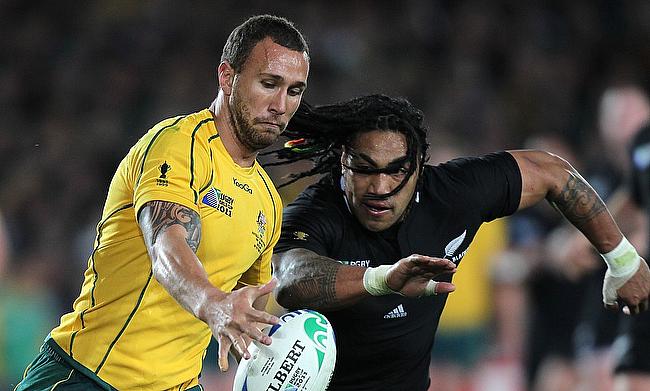 Quade Cooper (left) will start at fly-half for Australia
©PA

Australia head coach Dave Rennie has named Quade Cooper in the fly-half for the upcoming Rugby Championship game against Argentina on 6th August.

Cooper has recovered from a calf strain to make it to the line up with Nic White at scrum-half. Jed Holloway will make his debut for Australia forming a back row partnership with Michael Hooper and Rob Veletini.

Tom Wright starts at fullback for the first time while Jordan Petaia and Marika Koroibete are at wings. Jordan Petaia and Len Ikitau are at midfield while Darcy Swain returns after the suspension at second row along with Matt Philip. Folau Fainga’a will make his first start in the year and will be part of the front row that also has Allan Alaalatoa and James Slipper.

Matt Gibbon is set to make his debut when he comes off the bench.

“We’ve had a strong week of preparation over here in Argentina and we are highly motivated to put on a performance that makes our supporters proud back home in Australia,” said Rennie.

“It’s an extremely special occasion for Jed, Matt and their families and it’s up to the rest of us to make sure it’s a positive memory on their Test debuts.

“Argentina will be full of confidence after their home series win over Scotland and we know we’ll need to be at our best to get a good result on Saturday.”