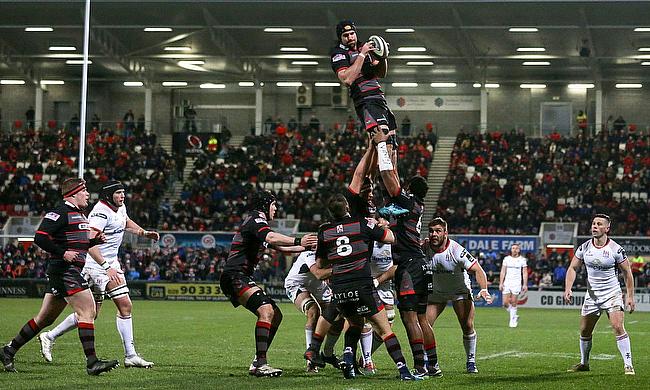 Edinburgh have been climbing the table in recent weeks
©Edinburgh Rugby

The latest rounds of this Pro14 season were played out against a backdrop of players absences due to Six Nations call-ups and Scarlets were hit particularly hard.

Scarlets’ outstanding season so far and Wales’ injury crisis led to the majority of their first XV being called up for international duty. The knock on affect for Scarlets saw a weakened side lose 22-12 away at Benetton Rugby in Round 14 before succumbing 20-13 away to Leinster the following week who were missing key players themselves.

Leinster’s home win over Scarlets saw them maintain their lead over the Welsh side in the league but they fell to Edinburgh a week before in the Scottish capital. Edinburgh triumphed 29-24 on the night as a weakened Leinster side conceded a 79th minute try. Richard Cockerill’s team have been on a steady run of form recently and they backed their home victory up with an away win at Ulster a week late. The Scots needed a drop goal from Duncan Weir in the last play of the game to take the points against an injury-ravaged Ulster side.

The result saw Edinburgh overtake Ulster in the table and they now sit in third place in Conference B, ahead of Ulster on the basis of matches won. The season continues to go from bad to worse for Ulster who face a huge fight to regain third spot. The team are now under the direction of head coach Jonno Gibbes after Les Kiss’s departure last month but are missing key players Charles Piutau, Craig Gilroy and Sean Reidy. Young outhalf Johnny McPhillips also hobbled off against Edinburgh which will be a particular concern given he is the only real number 10 in the squad after Christian Lealiifano’s return to Australia.

Gibbe’s era had got off to a flyer with a convincing 59-10 home win over Southern Kings as Gilroy grabbed himself a hat-trick. Southern Kings put in a much better performance in Round 15 as they led away to Ospreys at half-time before the Welsh side fought back for a 26-12 win.  Ospreys’s victory came on the back of their disappointing 26-15 loss away to Connacht the previous week. It was a role reversal for Connacht as they followed up their win with a 19-11 loss at home to Zebre. The Italian side continued their good form this season with the victory after falling 33-5 away to Munster in the previous round.

Munster couldn’t achieve consecutive victories either as they travelled to Cardiff Blues in Round 15 and lost 25-18. That completed a good two weeks for Cardiff who also defeated the Cheetahs 25-20 in Round 14. The Cheetahs never got going in the last two game weeks and Glasgow Warriors beat them 37-23 at home. Glasgow had earlier drawn 15-15 away to Dragons who followed up this strong performance with an 18-15 loss at home to Benetton.

Glasgow still lead the way in Conference A and look to have top spot secured as they hold a 16-point lead over second place Munster. The Cheetahs sit in third, Cardiff Blues in fourth and Connacht in fifth. Ospreys are sixth while Zebre remain in last place despite their improved form this season.7

Linester’s win over Scarlets sees them sit in first place in Conference B, with Scarlets just three points behind in second. Edinburgh are now third, tied on points with Ulster in fourth. Benetton are fifth and hold a large lead over Dragons in sixth. Ulster will hope to haul Edinburgh back but might start looking over their shoulders should Benetton pick up another few wins. Southern Kings, of course, remain in last place. The South Africans have yet to win a match but have picked up four bonus points along the way.