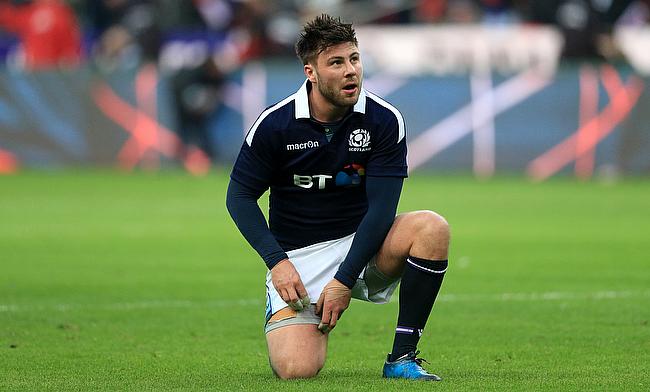 Ali Price was one of the try-scorer for Glasgow
©PA

The round eight of Pro14 tournament saw Leinster, Benetton Rugby, Munster, Dragons, Glasgow Warriors and Cardiff Blues win their derby games. Here is a round up of all the weekend's action.

As Ireland head coach Andy Farrell watched the game from the stands, the teams had an even start in the opening 10 minutes with Max Deegan and Angus Kernohan exchanging tries before Scott Penny put Leinster into lead with the first of his two tries in the 16th minute. As Ulster suffered a setback with Matt Faddes' sin-bin in the 19th minute, Penny with his second and Robbie Henshaw's touchdowns ensured Leinster with a bonus point.

Faddes returned strong with his try providing Ulster a breakthrough but his efforts were cancelled by Fergus McFadden's crossover in the 40th minute as the teams finished the first half with a 33-14 scoreline. The second half saw Rob Kearney, Cian Kelleher and Deegan score second half tries for Leinster while Craig Gilroy, a brace from Greg Jones and Jonny Stewart cross over for the visitors with the home side sealing a 12-point win.

This is Leinster's eighth win from as many games as they sit at the top of Conference A while Ulster are at second.

Benetton started the game with Marco Riccioni missing three penalties in difficult conditions before Marcello Violi got Zebre off the mark with a three-pointer at the stroke of half-time. The breakthrough for Benetton came in the 54th minute when Epalahame Faiva crossed over while Ian Keatley's conversion and a penalty ensured a 3-10 lead for the visitors.

Standings: This is Zebre's seventh defeat from eight games as they languish at the bottom of Conference A while Benetton are at sixth place in Conference B.

Player of the match JJ Hanrahan contributed with 14 points as Munster edged out Connacht by five points in Galway. Jack O'Donoghue was the only try-scorer in the first half while Hanrahan also slotted three penalties and a conversion to take Munster to 16 points in the first half. In response, Conor Fitzgerald kicked three three-pointers as the teams finished the first half with a 9-16 scoreline.

Hanrahan helped Munster stretch the lead to 10 points which they managed to hold on for the remainder of the game despite
Jack Carty crossing over in the 73rd minute for Connacht.

Standings: This is Munster's sixth win as they top Conference B with 29 points while Connacht are at second with 25 points.

Sam Davies' drop goal in the closing stage proved decisive for Dragons as they edged out Scarlets 22-20. In the battle of two Welsh sides, Leigh Halfpenny started the proceedings with a fourth minute penalty goal but Davies led Dragons response with three back to back three-pointers making the scoreline 9-3. but the home side's momentum was hampered with Matthew Screech's yellow-card.

Scarlets capitalised on the numerical advantage with Gareth Davies and Ken Owens crossing over but this time Wyn Jones' yellow-card in the 36th minute proved beneficial for Dragons as Rhodri Williams dotted down with teams finishing the first half with a 16-17 scoreline. With both the teams striving hard for a breakthrough in the second half, Davies and Halfpenny exchanged penalties in the 74th and 76th minutes respectively as the gap remained at one point before the Dragons fly-half with his last gasp drop goal ensuring a two point win.

Glasgow Warriors secured a vital victory in the ongoing Pro14 as they edged out Edinburgh 20-16 in the 1872 Cup opener. The opening half was about the two fly-halves with Adam Hastings and Simon Hickey trading two penalties apiece making the scoreline 6-6.

Edinburgh's infringements proved costly for them as they had three yellow-cards with Viliame Mata,Stuart McInally and Nic Groom all sin-binned in 40th, 49th and 74th minutes respectively. Despite the setback, Hickey with his third penalty goal made the scoreline 6-9 but the celebration was short lived as Ali Price's try in the 65th minute put Dave Rennie's side in front once again. The momentum once again swung towards the visitors with Blair Kinghorn's try but it was Glasgow, who seized the decisive moment through George Turner's try completing a four-point win.

Standings: The win has taken Glasgow to the fourth position in Conference A while despite the defeat Edinburgh are at third in Conference B.