Playing the Springboks with be a ‘massive honour’ for Namibia 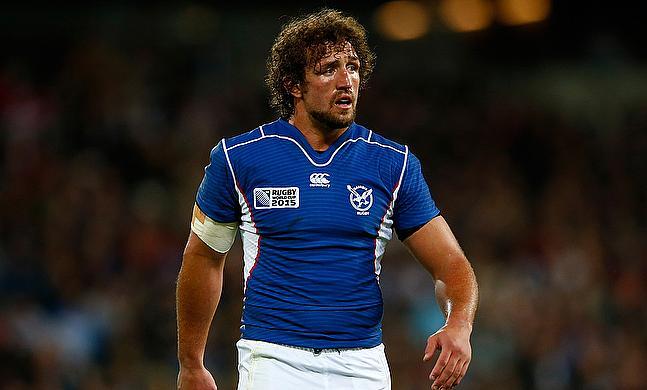 For 11 years, Jacques Burger pulled on the blue shirt of Namibia when available.

Stepping down from international duty after the World Cup in England and retiring altogether a year later, Burger now finds himself watching some of his former teammates on behalf of Super Sport in South Africa as a pundit.

“Obviously, I love rugby,” Burger said. “It’s easy to talk about something that you’re really passionate about. I feel that I’ve got a good understanding of the game and watching rugby then talking about it is probably one of the easier jobs in the world. The only thing that makes it a bit trickier is that it’s live!"

Since Burger retired from international duty, there have been some wholesale changes in Namibian rugby headed up by former Llanelli and Wales lock Phil Davies. Establishing a national training centre has resulted in the Welshman bringing down the average age of the Namibia team significantly, something that Burger sees as a positive for the future.

“I think he (Phil), has got to take a lot of credit,” Burger said. “He’s stuck around, he’s worked with a group of players, he had a vision going forward into the next World Cup and he’s got the boys behind him. He’s a very nice guy, Phil, he works well with people and the boys seem to be happy under him, which is key.

“Being a good man manager, working well with the guys and getting them all in the right direction, he’s got to take massive credit for where the team are now and the way they are going forward. He was part of the team that got the high-performance centre off the ground and got sponsors in, where over the years, basically nothing has been happening development wise.

“Things have been quite slow in Namibia to be honest. There’s not been enough happening in the development side of things, so it is good to get guys in from outside to step in and get us performing like the top guys are.”

Despite obvious improvements in the way that Namibian Rugby, the team is actually lower ranked than this time four years ago. The likes of Spain, Germany and Romania have improved massively and that is largely due to the geographical advantage that those European sides have being in such close proximity to one another.

Having a high-performance facility for the Welwitschias is invaluable. With only 11 of the World Cup squad playing externally to Namibia, having a centre where the players can train at a high intensity which is closer to home will no doubt be beneficial for the African country in the future.

The effects of a national training facility could be seen early on in Namibia’s 47-22 loss against Italy on the opening weekend of fixtures. Striking first through Damian Stevens, the side clearly tired as the game went on, but remained competitive for large chunks of the tie.

“I thought we played well at some stages,” Burger said. “I think Italy were very poor, but in the same sentence, Namibia did well to score a couple of tries, which will mean the world for their confidence.

The best thing watching the Namibian boys today was seeing the smiles on their faces despite losing.These are mostly amateurs but their dream of playing in a world cup for their country is as special as anyone else’s.Great sharing it with these legends @BreytonPaulse @WarrenBroz pic.twitter.com/ESsosnDXx7

“We are not forcing teams to play four, five or six phases before they score. It’s rather one or two phases before they score and it’s just coming around too quickly, which is worrying when you’re going to play the likes of the All Blacks, South Africa and Canada in the last game as well. So, if we tighten up the defence, make teams work a bit harder to score points against us, I think we’ll do well.”

Tomorrow, Namibia will be playing South Africa at the City of Toyota Stadium, a particularly big game for the team in blue. The countries neighbour one another, with several of the Namibia squad playing their domestic rugby in South Africa. As a result, this makes it a huge fixture and one special for those taking part.

Burger added: “It’s massive and it means a lot to them (the Namibia players). They look up to those guys, see them week-in week-out, watch them on TV, watch what they do and a lot of them really respect them for what they are. So, going out and playing them is a massive honour.

“I do feel that sometimes we need to look past the players in front of us and just go out and play. Just go out, take it to them and see what we can do. Have a crack at them in attack and if that doesn’t work, then let’s see how hard we hit them, unsettle them a bit.

“You saw what Uruguay did to Fiji, it’s a similar type of thing. The reality is South Africa is going to be extremely tough. They are still one of the contenders, even after losing to New Zealand but it is going to be a great experience for all those amateurs, even the professional guys in the squad. It is always a great honour to play against the Springboks.”