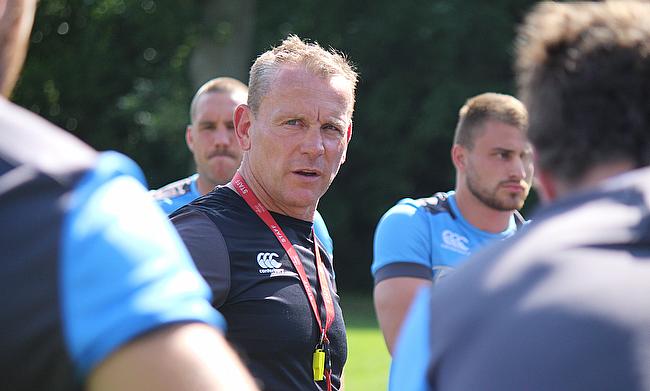 Canada were the last team to secure their place at the Rugby World Cup. In November 2018, Kingsley Jones’ men won a repechage tournament in Marseilles to take their place in Pool B alongside New Zealand, South Africa, Italy and Namibia.

The nation has been a mainstay at Rugby World Cups, having been at every instalment of the competition since its inception in 1987. For many, it would have been a travesty if the North American team had failed to qualify but despite having taken the longer route to guarantee their place in Japan, their Head Coach, Kingsley Jones, does not see this as a negative.

“I think the route for the team wasn’t such a bad thing for me. Obviously, we would have liked to have qualified earlier, but it certainly gave us an opportunity to play together last year. Although a lot of the team only came in in October and November, I learnt a lot about the group.”

Coming into the tournament off the back of their warm-up matches, Canada only managed to win one of these games, beating the BC All Stars in British Columbia, but lost all their Pacific Nations Championship matches as well as further games against Leinster and the USA.

“This years PNC, we were a bit underprepared,” Jones said. “The travel was good for us, but it was a tough three or four weeks. We have got better every game which is the positive. I thought towards the end of the Tonga game, we got a lot better and it was yet another game we lost on 80 minutes.

“We probably need to start better, but the positive is that we were 19 to nil down and came back at them at one point. That’s a real big improvement for us and it has given us lots to work on.”

Jones, much like his USA Rugby counterpart Gary Gold, is now able to select a squad made up from a majority of professional rugby players. Major League Rugby has clearly had an influence on Jones’ squad, with only six of his 31-man squad not having played professional rugby last season. Canada’s only team in the league, the Toronto Arrows, got to the playoff semi finals in their inaugural season and Jones has nothing but praise for the fledgling professional league.

“It’s a lifeline,” Jones added. “It’s an absolute lifeline for Canadian rugby because, 18 months ago we had 10 guys in a daily training environment, now we have 51 in MLR alone. I would suggest that 46 of those, around 18 months ago, were holding down day jobs, playing local rugby and you can’t do that and compete with the top 25 in international rugby anymore.

“They’re nearly all semi-professional or in a daily training environment of some kind and I think the fact the Arrows got that team out in Toronto, they been really supportive, working together and got to a semi-final.  You have the Seawolves who have won it twice on the trot and they have over half a dozen involved with the national team and they have been great to work with.

“MLR, let’s not get mixed up here, is in its infancy, and there is a long way for it to go and it gets better each week. But, ultimately, the guys are in a daily training environment which is absolutely critical to us.”

Jones is also behind a centralised academy being launched by Rugby Canada. Headed up by the Welshman, as well as Canadian rugby legend Jamie Cudmore, the academy has been established to optimise the talent of many young Canadian players breaking through into representative side.

“You’ve certainly seen a lot of change in this camp, but that has been Rugby Canada since I got here, especially in the under 20s,” Jones said.

“The Will Percillier’s, the Nick Carson’s, the Tyler Duguid’s, there are some really good players and it is a little too early for them. That’s another thing that has improved in the past 18 to 20 months, the MLR, the U20s pathway and the structure is improving.

“We want to kickstart it all by having a good World Cup now, but those players I mentioned will have a big future in 2023, 2027, which will hopefully be where you see the big improvements.”

Canada enter perhaps one of the most difficult pools in the Rugby World Cup as they prepare to face two of the favourites to take home the Webb Ellis, New Zealand and South Africa, as well as Italy and African champions Namibia. Despite stern tests ahead of them, Jones says that his Canada team will not shy away from the big tests that await them.

“I can tell you now that every player in this squad wants to play against the Springboks and the All Blacks,” Jones said. “From our point of view, I couldn’t have put the fixtures better. We’ve got Italy, which is a challenge and we’ll have a crack at them, see if we can put them under pressure. Who knows, maybe we could be like Japan and South Africa, maybe we could get an upset.

“Then, to play against the All Blacks and Springboks, I think a rugby player is playing for the wrong reasons if they don’t want to come up against those guys and measure themselves against the best players in the world. We’ve got everything to gain and nothing to lose. We’ll approach it with the mentality of having a go and finding out how good we are against them.”

Jones’ side is by no means bereft of top quality players. Number eight Tyler Ardron has previously played for Ospreys but is currently at the Chiefs in Super Rugby where he plays alongside All Blacks Brodie Retalick and Sam Cane.

Furthermore, DTH van der Merwe, Canada’s record try scorer, will be at his fourth Rugby World Cup. Playing his domestic rugby for Glasgow Warriors, where he is also the all-time top try scorer, Van der Merwe has also turned out for Scarlets and Newcastle in his career.

Calling upon some of his former players to join his backroom coaching staff, Jones has recruited Saracens scrum-half Richard Wigglesworth, who was coached by Jones at Sale, and Leicester coach Boris Stankovich.

?????? The @RugbyCanada team are really embracing the Japanese culture and the locals are loving it #RWC2019 pic.twitter.com/2jgIL10yBz

“It’s a bit of a challenge for us,” Jones said. “Unfortunately, we can’t employ fulltime coaches all year round. Wigglesworth will have a big future as a coach if he decides to really commit to it when he finishes playing. When I coached him, I always saw him as a leader, great communicator and brings a lot to the group.

“Boris is a guy that I coached at the Dragons, when he was in his later years, but I leant on him heavily there in the scrum and he really impressed me. Now he’s working with one of the best scrums in the Premiership, although the team hasn’t gone to well this year.”

This is not Jones’ first involvement at a Rugby World Cup. Part of Russia’s backroom staff in 2011 at the World Cup in New Zealand, Jones says that he will be taking some of those experiences into this Canada camp in Japan.

“You take your own experiences, there are similarities, but it’s not the same and some people make that mistake. Having the experience of a World Cup going into a World Cup is critical. Hence Richard Wigglesworth’s experiences, Gareth Rees is involved with us and Ray Barkwill has come with us as a coach.

“There’s things that can happen along the way, bumps in the road and unexpected things that pop up. There’s lots of things required in a Rugby World Cup. Of course it’s enjoyable, it’s the best time of people’s lives, but it is a long period together.”