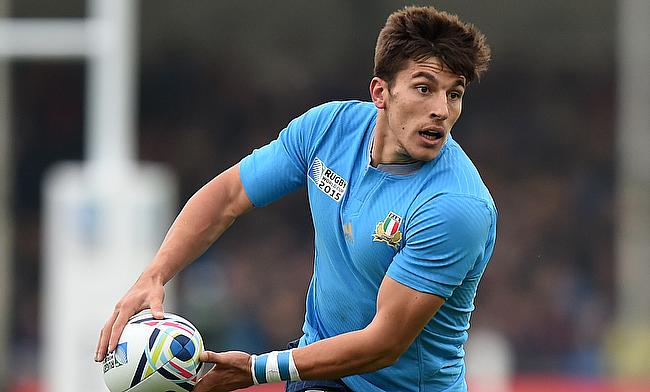 Tommaso Allan was one of the try-scorer for Italy
©PA

Italy kick-started their World Cup campaign off to a winning note as they defeated Namibia 47-22 in the Pool B clash at Hanazono Rugby Stadium on Sunday.

Namibia got the better of the start when Torsten van Jaarsveld capitalised on a loose ball and raced to Italy's half before a combination of Chad Plato and Darryl De la Harpe offloaded to Damian Stevens allowing the scrum-half to go over the line in the sixth minute and Cliven Loubser improved it to make it 0-7.

However, the scores were levelled shortly when Italy were awarded a penalty try by referee Nic Berry after Namibia collapsed in the scrum on their five-metre line.

When @sergioparisse takes to the field with @Federugby today, he will become only the third player to play in Five Rugby World Cups. Complete legend!

Conor O'Shea's men gathered momentum and scored again in the 26th minute when Tommaso Allan crashed over the post for a converted try to make it 14-7 and it soon became 21-7 before the break when Tito Tebaldi crashed over following an offload from Federico Ruzza.

At half-time it's @Federugby who lead @RugbyNamibia by 14 points. Can Namibia turn it around? #ITAvNAM #RWC2019

There was no looking back for the Azzurri as they scored two more tries after the restart. First, it was Edoardo Padovani, who made most of the grubber kick from Tommaso Benvenuti and Carlo Canna, who slotted the extras became their next try-scorer in the 47th minute taking the scoreline to 35-7.

Namibia showed some intent through a penalty from Cliven Loubser and JC Greyling in the 51st and 57th minutes respectively but Italy closed the game out with further tries from replacements Jake Polledri and Matteo Minozzi in the 70th and 76th minutes respectively taking the tally to 47-15 before Plato score a consolation try for Namibia in the end to only reduce their losing margin to 25 points.

One of the offloads of the tournament so far and a huge work rate helped Federico Ruzza win the @Mastercard Player of the Match for #ITAvNAM #StartSomethingPriceless #POTM #RWC2019 pic.twitter.com/MXmtjhKoTs

Seb Negri Column: It has been a shock to all of us