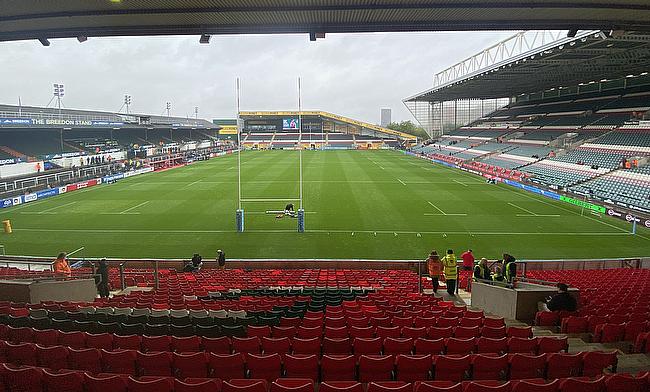 Leicester Tigers left it late to beat Saracens in the East Midlands on Saturday afternoon, a penalty try giving the hosts victory after a subdued first half performance against Saracens.

The rain had well and truly settled by the time Christophe Ridley blew the first whistle at Mattioli Woods Welford Road. Each side were unbeaten heading into the game, each team looking to maintain their well earnt starts to the season.

Saracens’ wait was a little longer, the squad having had a rest weekend seven days ago and today, much of the focus on the club had to do with off the field matters.

Mere hours before kick-off, it was announced that a new consortium of investors had taken charge at the StoneX Stadium, their investment setting them back £32m.

A considerable chunk of change, all that was left to do was for the players on the field to show why their new employers had put their money where their mouth is.

As previously mentioned, it was a wet day in the East Midlands, the points scored in the first half all coming thanks to the boot. Saracens were by far the most dominant of the two, consistently probing into Leicester’s 22, with Owen Farrell splitting the sticks on three occasions to George Ford’s one.

To begin the second period, it was much of the same, Farrell knocking the ball through the posts to keep his team in the ascendancy. It was then that momentum shifted, Leicester finding themselves deep in opposition territory.

Every time, whether it was defensive brilliance of offensive blunder, Tigers more often than not were repelled.

It was telling that much of this dominance came after the introduction of Jack van Poortvliet, Ellis Genge and Freddie Steward to proceedings. There was certainly more intensity, an intensity that played an important part in an eventual win.

What Steve Borthwick’s men needed was a stroke of luck, which they very nearly got. A hopeful ball hoisted above Saracens’ heads wasn’t dealt with by Max Malins, young Van Poortvliet dotting down, only for the TMO to find the home side offside.

Buoyed by their close encounter with the whitewash, Leicester turned the tide on their hosts in emphatic fashion. Firstly, a Ford penalty meant that a converted try stood between them and victory.

The ball would change hands and when Guy Porter was dragged into touch, many felt as though the jig was up. Aled Davies was deemed to have gone off his feet to put the wing into touch, an inquiry from the TMO proving as much, handing Tigers a shot at victory.

Tom Cowan-Dickie found his man, the drive heading straight for glory. Much like before, it was a Saracens error that handed the hosts a win, collapsing the set piece as it approached the try line, leaving all eyes on Ridley.

Mattioli Woods Welford Road erupted into four walls of sheer delight. Having been under the cosh for much of the game, a game that let little to be desired, its finish meant that all was forgiven, Tigers keeping top spot in the Gallagher Premiership.

Following the game, Leicester’s head coach, Steve Borthwick believed that it was his players’ ability to stay in the game that ultimately led to his side finishing on top.

“My thoughts going into the game was that we’re playing Saracens and you’ve got to stay in the fight,” Borthwick said. “The players hung in there.

“Credit to them for sticking in the battle and we were fortunate to come away with the victory. When you stay in touch, you’ve got a chance.”

In addition to this, when asked about the crowd that had made their way to Leicester to watch their team walk away as victors, Borthwick says that he hopes his team have brought some smiles to fans faces.

“That is the thing that pleases me the most,” Borthwick said. “Supporters have been going through tough times the past 18 months, it’s great to see them in the ground and I hope we did them proud. We could easily have lost that game.”