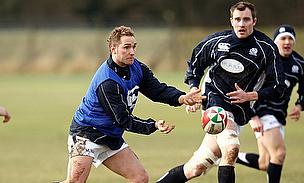 Scotland fly-half Dan parks leads a cast-list of eight Connacht players leaving the Irish province at the end of the season.

The 66-cap former Glasgow and Cardiff Blues playmaker will leave Galway this summer, after two years at the club.

Irish centre Gavin Duffy is another player to leave the club after an eight year stint, his second at his home club, with three years at Harlequins in between.

"It's a tough time of year for players and management who have to make decisions about the future of the squad," said Connacht boss Lam.

"In the professional game, no squad is ever the same from one year to the next and there are always a number of players moving on.

"These guys have given so much to Connacht and we have nothing but respect for them as well as appreciation for what they have done."

Former Samoa flanker Lam has already recruited centre Bundee Aki from the Chiefs and hooker Tom McCartney for next season.

Ex-Newcastle and Northampton loose-forward Lam hailed Duffy and Parks ahead of their summer departures, as he continues to re-jig his squad.

"Guys like Gavin Duffy exemplify what Connacht is all about," he said.

"Born and bred here, he has been a fantastic ambassador for the province and has always conducted himself with the utmost professionalism.

"Over the last two seasons, Parksy (Dan Parks) in particular has contributed massively to the development of our young back-line and I know they have taken a great deal from the wealth of experience he brought with him."