Pandas in the Mist 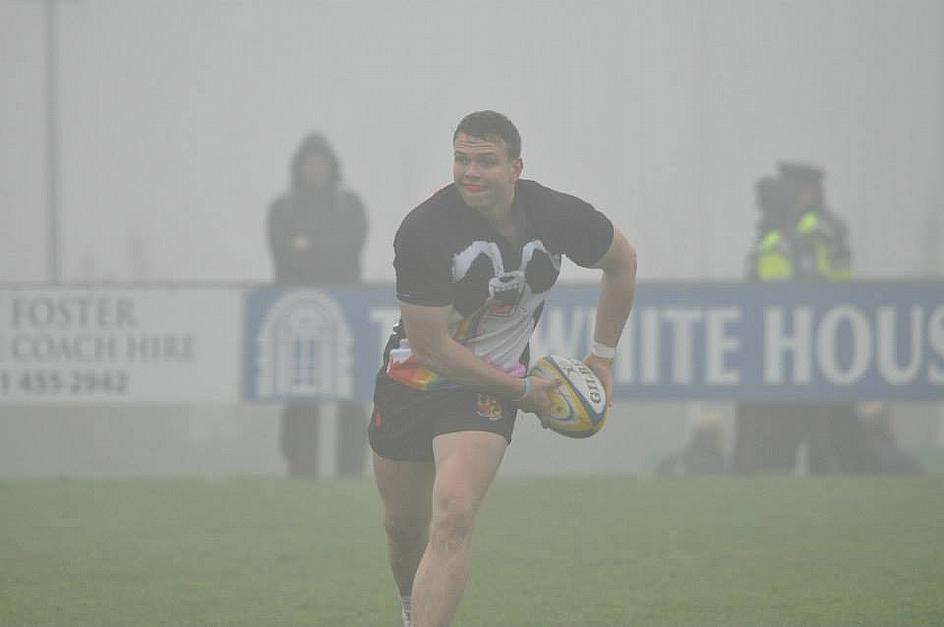 Captain Harry Sanders on the ball 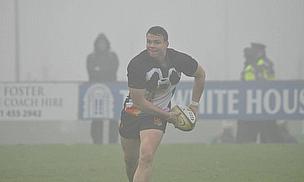 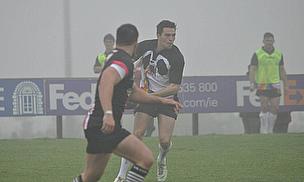 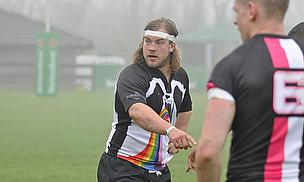 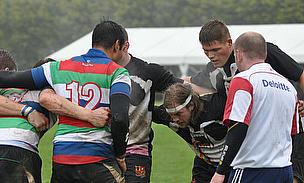 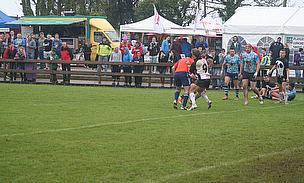 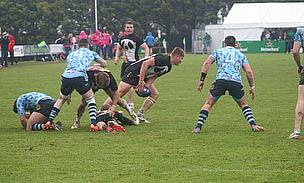 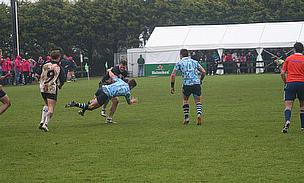 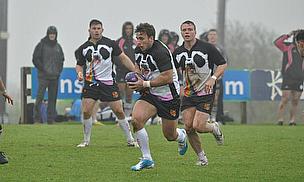 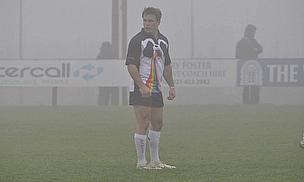 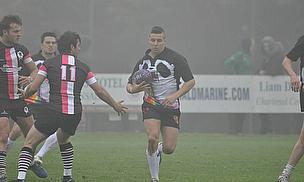 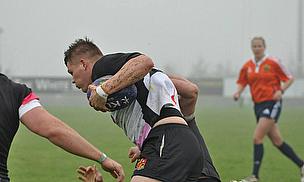 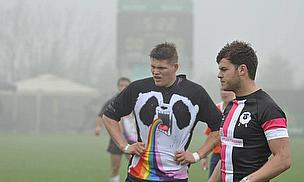 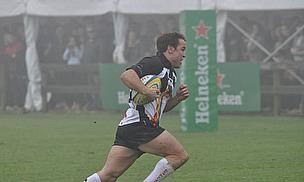 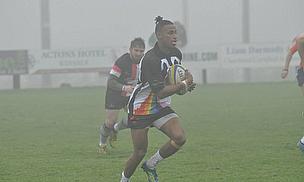 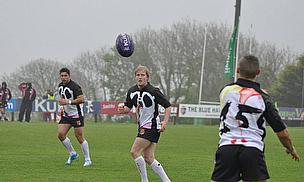 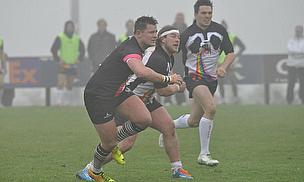 The kits were clean, the balls were pumped, the music was ready and the kegs were full, and apart from the awful conditions, the stage was set for one of the home nations’ biggest rugby sevens festivals.

After the disappointment of finishing last year’s tournament as runners-up, the new Red Panda squad was assembled as the Pandas were back in Ireland once again, in search of that elusive Kinsale crown.

The 2014 squad was made up of guys from all stretches of England, with players from university rugby, schools rugby, the Championship, National 1 and finally, National 2 making up the team.

On the first day of the competition there is a seeding tournament – a mini tournament in its own right for the elite players, helping to acquire the sides’ rankings for the main competition on the Sunday.

As the Pandas returned to Kinsale Rugby Club for the first time since the heartbreak of last year’s elite final, the festival was already well underway – with the stands filled with fans, the music loud and the rugby on the go.

After plenty of preparation, kit unveiling and signs of a team beginning to take shape and gel together – the rain and mist set in, with just a few minutes to go before the kick-off.

With the pitch’s far posts barely in vision, the Pandas took to the filed, lining up against the Black Sheep as the first day of the elite competition got underway.

In a scrappy midfield battle it was the Pandas, in the opening few minutes, who showed their intentions from the off with a strong, persistent defensive display. Gloucester University centre Ruaridh ‘Rory’ McConnachie set the tone for the Pandas with a crunching early hit.

The break came just a few minutes later, as the team in black and white broke through the line thanks to Ealing Trailfinders full-back Andrew Henderson. Just moments later they crossed the whitewash again, thanks to Sedgley Park wing ‘Cookie’ – who has signed for Sale Sharks as of next season.

Just before the break there was another try for the Pandas, to make the score 19-0, as experienced Esher flanker Steve Wood pounced on a loose ball and barrelled his way over the line.

As manager Alex Keay rotated the squad, the competition descended into a bit of a stalemate, with the game already won and the Pandas first ‘W’ of the day on the board.

As is the nature of sevens rugby, the next game was just around the corner – a repeat of last year’s elite final – against local side the Wild Geese.

As the rain pounded down, fans were entertained by one hell of a physical game of sevens for the Red Pandas, against visibly larger opposition. 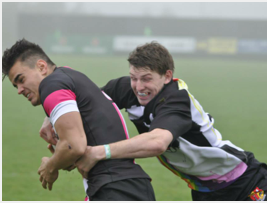 As the hits went in for both sides it was the Pandas who broke the deadlock and opened the scoring, thanks to one of the squad’s youngest member, Rhodri Mayor – an accomplished sevens player, who, although born in Wales, has been asked to represent Scotland at age-group level.

Former Bath University winger and experienced Red Panda Ben Loosemore continued the side’s good form with another try to the tally. A break on the halfway line from Ben, who currently resides at Worthing Raiders, saw him power past the defence for half of the pitch.

Durham University student Murray Galbraith-Lowe then crossed for their third before the break to make the score 21-0.

In the second half Esher playmaker Freddie Strange broke through the line and made the gap for Slovenian international and Talking Rugby Union’s very own Creative Director, Max Skofic, to cruise over for another well-deserved try.

A mightily impressive, physical performance from the Pandas, over much bigger opposition and current Champions the Wild Geese, hinted to the promise of this young squad of players.

In the final game of the day, Red Panda took on eventual competition winners the Wooden Spoon Marauders and powered past them with an impressive 12-0 victory.

The first half was dominated by the Pandas in persistent, torrid, wet conditions; however, the breakthrough did not come. Steve Wood was strong in defence throughout the half, proving his worth as a true sevens forward, concentrating on structure and defence rather than chasing the ball.

Just seconds before the break Pandas skipper Harry Sanders, a final year Bath University student, forced a brilliant turnover and handed the resulting ball to electric winger Cookie, who put the ball down for the first score. The second half brought the game deep into the Pandas half, as they couldn’t find a way past the Marauders and out of their own 22”. As changes were made the pressure continued to build, with the Wooden Spoon outfit looking just moments away from scoring. However, a stroke of luck came, as young experienced Welsh sevens player Stefan Andrews showed his true pace for the first time and galloped almost the length of the pitch to score and seal the game.

A hugely successful day for the Red pandas, with no points conceded and three wins to their name, was capped off by the day 1 trophy presentation.

However, the job was only part done, with the main part of the competition yet to come on the following day…

On the Sunday, and the main day of the competition, once again, sevens fever had taken Kinsale rugby club and the town itself by storm. Like the club, the streets were lined with sevens fans all ready to enjoy another day of rugby and partying.

The competition really heated up on the second day, with the sizing-up now well out of the way, the real rugby could get underway.

As with the previous day, the Pandas faced off against the Black Sheep and the game was a much more hard-fought, physical encounter than before.

The Pandas looked out-of-sorts from their tremendous form on the opening day, as they conceded their first try of the tournament just a few minutes into the game.

However, conceding a try seemed to spark them into life as the Welsh Wizard, Stefan Andrews, again showed his pace and broke through the line to score a great try.

Just moments later Steve Wood backed this up with a second try for the Pandas, taking them 12-7 ahead.

After the change of ends, though, the Pandas conceded for a second time and were on the back foot once again at 14-12.

However, with just a few minutes left on the clock Andrew Henderson ran almost the entire length of the field to score a magnificent try, propelling the Pandas to a 19-14 win.

Just twenty minutes later, the distinctive black and white of the Pandas standout kits were swarming onto the field for the second and final group-stage match of the day against Trinity 7’s. 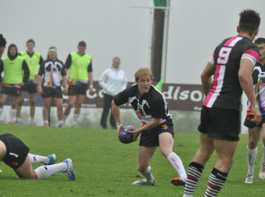 However, once again, the game got off to the worst possible start, with a Trinity winger showing extreme pace on the outside and flying past the Panda’s defence to score a troubling try just a few seconds in.

After slowly inching their way up the field for almost the entire half, the Pandas found themselves just a few metres from the Trinity line. After a number of failed attempts it was Esher playmaker Freddie Strange who broke through on the blindside and crossed for the score. Though, they could not convert the resulting kick leaving them still two points behind at the break.

The second half started in an almost identical fashion to the first, with Trinity running in another try to extend their lead.

After a troubling five minutes of sevens rugby, with just over a minute left on the clock, the chance finally came and it was that man again – Ealing’s Andrew Henderson – who came onto the field and found the gap, running the ball almost the length of the field with a fantastic solo effort.

However, disaster struck as ‘Hendo’ took the crucial conversion in front of the posts to tie the scores level and send the Pandas into the semis. Filled with good intentions, unfortunately, he rushed the conversion when trying to go for the win, missed the kick and sadly sent the Pandas into their first defeat of the weekend with not enough time left to score again.

After the Black Sheep defeated Trinity in the third and final group match, all three of the teams were left with one win to their names – so qualification came down to points difference.

Luckily for the Red Pandas it was the Black Sheep and themselves who progressed into the semi-finals with a repeat of the 2013 final against the Wild Geese next on the list.

Once again the Pandas took on the much larger opposition, filled with confidence after enjoying an impressive first day win over the Irish competition. However, like the rest of the Sunday’s action, the game got off to the worst possible start.

The Geese ran in two unopposed tries in the first few minutes, creating clear breathing room on the score sheet.

Andrew Henderson is clearly blocked by the referee. Things then moved from bad to worse for the Pandas as they were beaten to line by both the Geese and the referee, who carelessly placed himself between the player with the ball and the Panda defender, giving the Geese an unopposed run over the line – a disappointing and unprofessional display of refereeing that wasn’t admitted and called-up by the the man with the whistle.

A dejected Red Panda side grouped together in a dis-heartened huddle at the break, with just seven minutes left to turn things around before eviction from the competition.

The Pandas came out fighting; and it was Murray Galbraith-Lowe who got them on the board with a try early on in the second stanza. The Pandas were flying once again now as 'Hendo' added to his impressive tally with another try, to pull within a few points.

Murray Galbraith-Lowe gets the Pandas on the board in the semi-final. 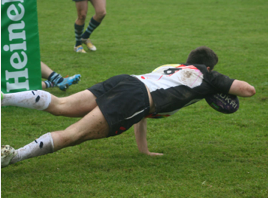 As the seconds wound down, though, even with all of their dedication and best efforts, the Pandas couldn’t find that final score they so desperately sought. The final nail in the coffin came as a midfield ball was turned over, allowing one of the giant Geese to run through the line and cross for their fourth try of the game, sealing the win.

A disappointing second day for the Pandas was capped off by a repeat loss to last year’s winners the Wild Geese; however, a tremendous performance on the previous day, with a competition win to their name, made the Irish weekend another successful one for team Red Panda.

In the elite final the holders, the Wild Geese, were out-classed by another team, the Wooden Spoon Marauders, who won the showpiece game with a tremendous 30-0 victory.

The sevens circuit is now in full swing as the Pandas continue their season this weekend at the inaugural City of Manchester 7’s tournament at Broughton Park Rugby Club.

Stay tuned to Talking Rugby Union for all of the latest news, reaction, pictures and videos from the event.