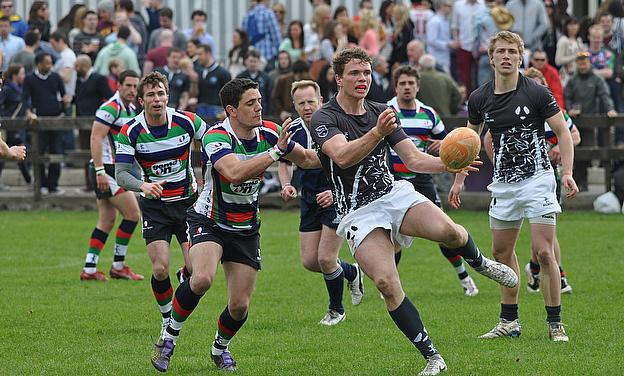 The Heineken Kinsale 7s kicks off next weekend 3rd & 4th May with a full line up of competitive 7s running rugby and full social programme as over 10,000 visitors are expected in the seaside town.

Due to its continued popularity, the Heineken Kinsale 7s is fully subscribed with 86 teams registered from , , , , the and , featuring elite and club players from all over the world.  They are competing for an attractive €30,000 prize fund as well as enjoying the festival atmosphere Kinsale has to offer.

Kinsale RFC welcomes to the Men’s Elite Competition defending Champions, the FFS Wild Geese; the Red Pandas and Wooden Spoons from the and strong challengers UCD and Trinity College Dublin.

Also, a number of teams in the Men’s Open and Social competitions, to include defending champions The Lightning Bolts from Dublin, Merciki from France, the RD7s and Tunbridge Wells Clungenmeisters from the UK as well as a number of Irish and UK teams looking forward to a weekend of running rugby and a great craic both on and off the pitch.

The Women’s tournament is hugely popular again this year, with over 20 teams in Elite, Open and Social competitions including the Norwegian Vikingettes from Norway, Wooden Spoon Women from the UK, the Lady Rogues from Germany, the Tommy Bohs from UL, Angry Birds from Dublin and a team from Luxembourg competing in the Women’s Open Competition.

Pat Maher Heineken’s Event and Sponsorship Manager said; “Heineken, alongside our business partners in Kinsale and surrounding areas, are delighted with our long association with this fantastic event. Recent successes on the playing fields have rugby awareness and affinity at a very high level. This enjoyment will encourage many people to come to Kinsale to witness another form of the game at its highest level. We wish Kinsale RFC continued success planning and presenting another successful tournament over the May Bank Holiday Weekend.”

For the sixth year, Kukri is the official event wear for the Kinsale 7s. At the launch, Philip Stokes, Tournament Director announced that Kukri has just signed a deal for a further three years and thanked Terry Jackson, Managing Director of Kukri for their continued involvement and support.

“We are delighted that Kukri is continuing their involvement with the event for a further three years. We are looking forward to another colourful ‘Kinsale 7s’ collection that is available over the weekend and we understand that many teams have already ordered their event wear in advance that adds to the festival atmosphere of the weekend,” he added.

The Heineken Kinsale 7s generates a massive boost to the local economy at the start of the tourist season and is staffed entirely by volunteers.  It is a hugely important event for Kinsale town and district and allows Kinsale showcase its heritage and gourmet reputation.

All the pubs and night clubs in Kinsale provide great theme nights and DJs over the weekend. The Festival Club returns on Sunday 4th May at from 9.30pm with tickets available at Registration. The Kinsale 7s is strictly over 18s event and all participants and supporters must register with photo ID.

The Heineken Kinsale 7s continues to increase its social media profile attracting over 100,000 facebook friends during last year’s event and many thousands of twitter followers.