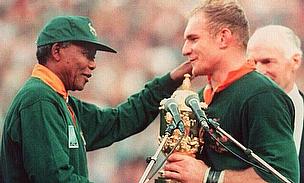 RedPanda7s - What A Year!
England Sevens Make It Two From Two
City of Manchester 7's Festival - The Hottest Ticket in Town
Sevens Heaven - So Tell The Men In Blazers!
Ashton Leads Saracens Into 7s Final

Amidst emotional scenes in Port Elizabeth, South Africa came from 14 points down to win the final of the Cell C South Africa Sevens 17.14 against New Zealand and win the title honouring recently passed Nelson Mandela.

In a repeat of the final from two years ago, won in the dying seconds by New Zealand, Branco du Preez and the influential captain Kyle Brown hit back for a spirited South Africa cheered on by over 30,000 fans.

Tries from Scott Curry and Sherwin Stowers put the World Series champions into a 14-0 lead, before Branco du Preez struck back for two scores for the hosts after Tim Mikkelson was sent to the bin.

The Blitzbokke trailed by two points at the break before captain Kyle Brown's crucial score put them ahead 17-14 after sustained pressure in the New Zealand half. It was the tale of the second ten-minute period as the crowd exploded into rapture at the final whistle to celebrate an occasion that meant so much.

It is the first time since 2008 that the South Africans have won their home Sevens tournament, and their first at the Nelson Mandela Bay Stadium, a poignant and fitting tribute to the country's late former President.

The dramatic victory leaves South Africa just two points behind the All Blacks Sevens in the overall HSBC Sevens World Series standings after three rounds, with Fiji a further eight behinds behind the Blitzbokke.

In the semi-finals New Zealand beat Samoa 19-5 with Tomasi Cama scoring 14 of their points, while the inspired hosts were too strong for Argentina winning 31-0 thanks to tries from Brown, Cecil Afrika, Sampie Mastriet, Kwagga Smith and Justin Geduld.

Earlier South Africa progressed to the semi-finals by beating Portugal 45-0 with Werner Kok and Justin Geduld delighting the crowd with two tries in the victory, after New Zealand proved too strong for a spirited Kenya in a 19-0 victory.

Elsewhere, in the Plate competition, Fiji beat France in an enthralling Plate final, which follows on from their Cup win in Dubai last weekend.

Julien Candelon scored two tries for France to take his tournament tally to six, but Donasio Ratubuli and Benito Masilevu also scored braces to secure a 45-19 win for the flying Fijians against les Bleus.

Clearly upset by their quarter-final defeat to Samoa, Fiji impressively beat Kenya 52-5, despite playing the majority of the match with six men in the first Plate semi-final. Samisoni Viriviri scored two of their eight tries while Emosi Mulevoro contributed 13 points in the win.

Finally, it was England who earned their first silverware for new Coach Simon Amor in the Bowl final.

Shannon Walker scored his seventh and eighth tries of the tournament but that was not enough as England beat Australia 28-19 to go unbeaten on day two and win the Bowl.

Having finished third and fourth respectively in the first two rounds of the HSBC Sevens World Series, England were disappointed to have missed out on the Cup competition but ensured they went home with eight Series points by beating Mic O'Connor's side and claiming Amor's first piece of silverware as coach after earlier victories against USA and Scotland.

Australia secured their place in the final by beating Wales 33-21, with Walker scoring a hat-trick in their 38-5 quarter final win against Zimbabwe.