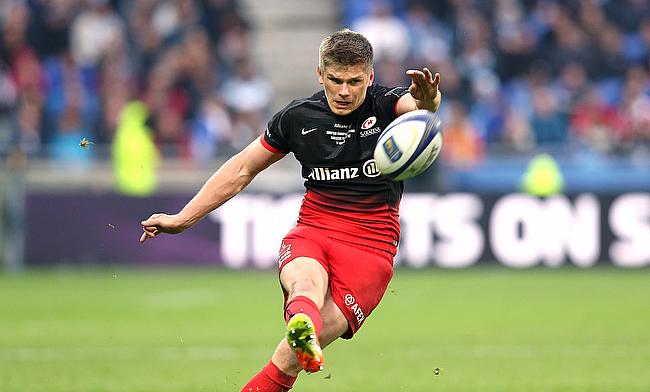 Owen Farrell led from the front for Saracens
©PA

England stars return for Saracens in Premiership clash against Bath

Owen Farrell led from the front with 20 points as Saracens went on to beat Bath Rugby in the fifth round of the Gallagher Premiership at Recreation Ground on Friday.

This is Saracens' fourth win from five games but have to remain at the bottom as they were docked 35 points due to salary cap breach. They now have -18 points in their tally while Bath are at eighth place with eight points.

Bath without injured Anthony Watson got off the mark in the third minute with a penalty kick from Rhys Priestland but Saracens responded back in the 10th minute with Farrell's three-pointer.

The trend continued in the next few minutes as both Priestland and Farrell traded penalties as the teams finished the first quarter with 6-6 scoreline.

With his third penalty kick around the half-hour mark, Priestland gave Bath a three-point lead but Mark McCall's men finished the first half strong with Sean Maitland touching down in the 33rd minute and Farrell followed with a conversion and a penalty as the teams went into the break with a 9-16 scoreline.

The Sarries extended the momentum into the second half with Farrell's kick from the tee but Priestland's three-pointer in the 55th minute ensured the gap remained at seven points.

However, the visitors dominated when it mattered the most as Farrell's back to back penalties stretched their lead to 13 points which they maintained until the end despite playing the final 10 minutes without Maro Itoje, who was yellow-carded in the 71st minute.

“It was difficult conditions. Even though it wasn’t raining it felt like it was raining as the ball was slippery and it was a game full of mistakes," said Saracens director of rugby Mark McCall.

“I think the first 20 minutes it was all Bath, first 25 minutes maybe, and we absorbed a lot of pressure but it just felt like we grew into the game.

“The longer the game went on the better we got, the more control we got and we actually scored a beautiful try in the first half in difficult conditions.

“We seemed to have complete control with about 20 to go and did a couple of daft things around the halfway line to give them access to our 22 but overall I thought we fronted up. We had a real togetherness and tightness about the group and we can go forward with that."