Ospreys up to sixth with victory over Dragons 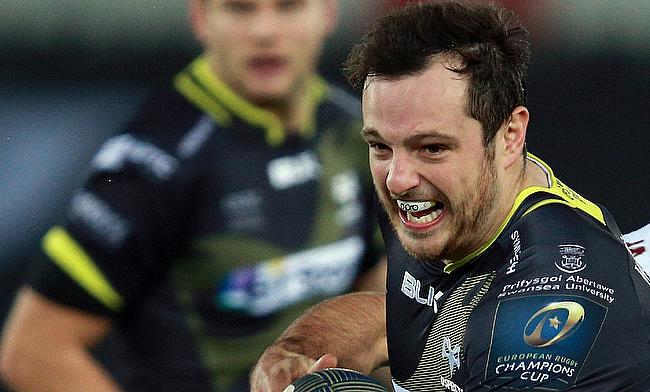 Ospreys saw off a second-half comeback from Newport Gwent Dragons to clinch a hard-fought 12-7 Guinness PRO12 win and make it two Welsh derby victories out of two in the space of six days.

After a narrow win at Scarlets on Boxing Day, the Ospreys eventually saw off the Gwent outfit by two tries to one despite failing to score a single point in the second half.

Ospreys moved up two places to sixth in the table thanks to first-half tries from full-back Dan Evans and wing Hanno Dirksen, while Ed Jackson went over for the Dragons midway through the second half.

The result meant Ospreys extended their record of not having lost to another Welsh side at the Liberty Stadium since October 2010 as Newport, for their part, continue to seek an away win in the competition this season.

Ospreys rested Wales fly-half Dan Biggar with Sam Davies replacing him as one of five changes from the win against Scarlets last weekend.

The Dragons also made five changes from the 20-21 defeat by Cardiff Blues last Sunday, though it was Ospreys who enjoyed a high percentage of possession and territory to earn their 12-0 interval lead.

However, two missed penalties from Davies on four and 12 minutes respectively meant the home side had to wait to see their dominance reflected on the scoreboard.

The first of their two first-half tries came through full-back Evans after an incisive break by Dan Lydiate, a finely weighted pass by Davies, and a missed tackle from Ed Jackson. However, Davies missed the conversion attempt.

When the Dragons did get a good ball scrum-half Sarel Pretorius and lock Rynard Landman looked dangerous, but the visitors were made to defend more often than not.

And on 35 minutes, the Dragons conceded a second try when scrum-half Tom Habberfield put wing Dirksen over. Davies, this time, was able to add the extras.

Heavy rain arrived after half-time to make the second half something of a leveller. Ospreys, though, were not helped when Lydiate was forced off after a clash of heads with Aaron Jarvis.

Ospreys did have their chance to put the match beyond doubt, but Davies' 40-metre break did not produce the try it perhaps deserved.

At the other end, Jackson just managed to get over the line from a line-out drive on 66 minutes, with Jason Tovey's conversion taking the Dragons within five points of Ospreys' lead.

Biggar was to come on for the final 15 minutes but his contribution was largely defensive as Ospreys clung desperately to their lead.