O'Brien to Stay with Leinster 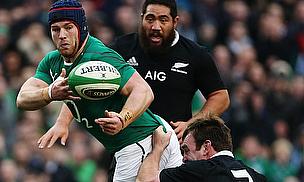 After much contention, Ireland flanker Sean O’Brien has agreed to stay on with three-times Heineken Cup winners Leinster.

O'Brien, who was part of the Lions squad that toured Australia last year, had been linked with a move to France.

Newspaper reports suggested the 26-year-old from Carlow was on the verge of joining European champions Toulon.

The 26-year-old's new central contract is a clear boost to the Irish Rugby Football Union, which confirmed the news in a tweet. The union had feared losing the imposing back-rower to the Top 14.

Ireland bosses will now turn their attention to O'Brien's Leinster team-mate Jamie Heaslip, with the 30-year-old out of contract in the summer and also considering an offer from Toulon.

O'Brien will miss the upcoming RBS 6 Nations with a shoulder injury, but his renewed commitment will increase IRFU confidence it can now convince Heaslip to follow suit.

Ireland and Lions fly-half Johnny Sexton joined Racing Metro in the summer, leaving his national team bosses with no say on how frequently he plays.

The 28-year-old was put through 13 games in 10 weeks in the build-up to Ireland's autumn series, culminating in a hamstring injury that left head coach Joe Schmidt admitting Ireland had "lost control" of the player.

O'Brien's decision to stay put is another shot in the arm for Irish home comforts, with the IRFU proud of its player welfare initiatives that ensure its top stars are carefully managed to peak for international action.

The IRFU announced that O'Brien has agreed a two-year deal that will see him remain at Leinster until at least June 2016.

O'Brien said: "It is flattering to find yourself the subject of interest from some of the biggest rugby clubs in the world, but in the end I made a decision based on the standard mix of professional and personal considerations.

"It was a very difficult decision but, with a World Cup next year and the fact that I believe Leinster can continue to win trophies, I have decided to commit my immediate future to the club.

"I am very excited about what Ireland can achieve under Joe Schmidt, and I am confident that, under Matt O'Connor, Leinster will remain the power in Europe it has been over the past five or six years.

"I want to acknowledge the professionalism of all those involved, including the overseas clubs with whom I had discussions, and thank Leinster and the IRFU for their commitment to me.

"Finally, a word about the Leinster fans because their 'voice' represents an important consideration for players like me when it comes to making big career decisions such as this."

"He has proven for Leinster, Ireland and the Lions that he is world-class player, and we are delighted that Sean has committed his future to Leinster and Ireland for the next two years."

And Leinster chief executive Mick Dawson said: "We are delighted that Sean has signed a new IRFU contract which keeps him at Leinster up to the end of the 2016 season.

"We were always hopeful that the environment we have created here at Leinster and the ambition of the club would be a strong factor in Sean's decision.

"He is a truly world-class player, and we are delighted that his future has now been put to rest."