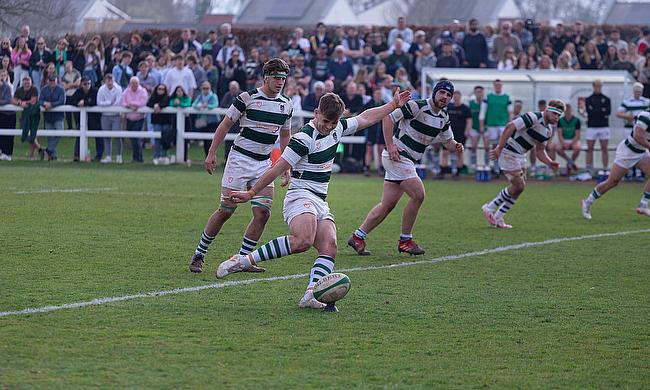 A trip to Cardiff Met - Why the Archers really are a 'popular breeding ground' for future stars
The past, the present and the future - Exeter University is a proven pathway for success
Inside the University of Exeter pathway and why it is benefitting the Red Roses
University Rugby is strengthening its status within professional pathways - and it is only going in one direction

The University of Nottingham ensured they will head into their BUCS Super Rugby play-off on a high following a thrilling 30-25 BUCS Vase victory over Newcastle University.

After two incredibly hard-fought games earlier in the season between the two sides, this final was no different and Max Brown’s penalty ultimately settled a riveting contest after extra-time.

Nottingham, who were backed by swathes of supporters on their home ground, led 10-0 thanks to an early Henry Mortimer penalty and an Alex Sabin try.

But the opening period was marred by a serious-looking injury to Newcastle’s talisman Jack Glover and after a lengthy stoppage, the North East side responded commendably with two Callum Grieve penalties.

Darren Fearn’s charges upped their intensity after the break and nudged their collective noses in front following Zack Kerr’s try, which was brilliantly created by Sam Carleton.

Ben Sugars’ effort swung the pendulum back in Notts’ favour before Mortimer landed another penalty to stretch their advantage to seven points.

But this scintillating final still had plenty more to offer as Ben Taylor’s converted try levelled things up and Newcastle even had the chance to win it right at the death, but Grieve’s long-range penalty attempt was unsuccessful.

Nottingham landed the first blow at the beginning of extra-time through Will Poland’s clever score but back came Newcastle as Ollie Melville surged over to make it 27-25. However, this to-and-fro encounter was finally punctuated by Notts fly-half Brown who pinged over a penalty to seal the win.

Paul Westgate’s side, who finished four points clear of Newcastle at the top of Premier North 1, are now preparing for their shot at a place in BUCS Super Rugby when they take on Northumbria University in the play-off on April 13th.

“What an advert for student rugby!

“@_unruc have got a great togetherness and that can help take us far.”

If there was any sense that Nottingham had one eye on that upcoming BSR clash, it was not evident as they set the tone early on in glorious conditions.

After Mortimer’s penalty, Brown produced some individual magic to weave past the Newcastle defence before Sabin dived over with 11 minutes on the clock.

The visitors responded through Grieve’s first three-pointer of the afternoon, and the injury to captain Glover could have rocked Newcastle but another penalty from the fly-half kept them in touch going into the interval.

It was first blood to Fearn’s charges in the second half as Carleton's brilliant step and break took him to Nottingham’s 22 before the full-back flicked possession onto Tom Quinlan who sumptuously offloaded to Newcastle Falcons academy starlet Kerr who strecthed into the corner.

Following a ferocious beginning by Newcastle, Nottingham hit back and their pressure led to the North East side being reduced to 14-men before home skipper Ben Sugars scampered over in the corner to turn the tide once again.

The away side were awarded a penalty following the aftermath of Sugars’ try but Grieve’s attempt from halfway clattered the crossbar.

After losing narrowly to Nottingham in the league back in December, Newcastle were certainly keen to exact revenge and following a couple of penalties which went in their favour - including a yellow-card to Oli Thorneywork - Fearn’s side tied the game as Taylor dotted down.

Grieve then had the chance to clinch a dramatic victory late on, but his penalty sailed to the right of the posts meaning extra-time in Nottingham.

It took no time at all for the home side to add to their tally as Poland instinctively sniped his way over to hand Nottingham the ideal start. Despite this, Newcastle once again responded well to going behind, Melville galloping over the line to cut the deficit to two points.

The final knockings of this gripping match saw both sides press for a penalty to try and clinch the win, and eventually it was Nottingham who took their chance as Brown’s sweetly-struck kick concluded a pulsating final.

Nottingham Performance Director Paul Westgate: “Full credit to Newcastle. They were outstanding. They were one kick away from winning it, but what an advert for student rugby.

“We are building a strong culture here. We believe in what we do. We have got a great togetherness and that will get you a long way when you are under the cosh like we were today.”

Newcastle Head of Rugby Darren Fearn: “We are where we are at the moment. What fills me with a lot of confidence is the lads who are graduating, the lads who have come in from first and second year, they have taken it forward so we can’t knock any of their efforts today.”

Silverware shines again for Exeter after clinical win against Cardiff

After gaining promotion to the Women’s National League, the University of Exeter completed their season by clinching a 36-5 win in the Women's BUCS Vase final against Cardiff University.

The Green and Whites raced into a healthy lead as Poppy Leitch’s side ran in three tries in the opening 20 minutes through Niamh Orchid, Emily Foster-Godley and Tessa Grainger.

However, Cardiff’s endeavour and willingness to keep the ball alive was rewarded when Catrin Jones dotted down but Exeter were ruthless and scored their fourth try of the afternoon via Lauren Summers on the stroke of half-time.

In a role reversal from the first 40, Cardiff dominated possession and territory for large portions of the second half but their efforts were not reflected on the scoreboard as Exeter took the game away from their opponents.

The excellent Katie Buchanan supplied Grainger with her second as Exeter capped off the perfect season by lifting another piece of silverware as well as ending the campaign unbeaten.

League winners Durham University will face Loughborough University in the last four after both sides secured comfortable victories in the quarter-finals.

The Palatinate, who achieved a record number of points in the BUCS Super Rugby campaign, beat Leeds Beckett 26-7 at Hollow Drift whilst Loughborough’s Tom Miles, Ben Fitzgerald and George Barber all scored in their 40-10 success over Swansea University.

On the other side of the draw, Exeter saw off three-time winners Hartpury 19-16 at Topsham after recovering from 10 points down and Keith Fleming’s troops will face Cardiff Met in the semi-finals after the Archers narrowly beat city rivals Cardiff 34-33 in an absolute thriller at Cyncoed.