Northumbria battle back to stay on top 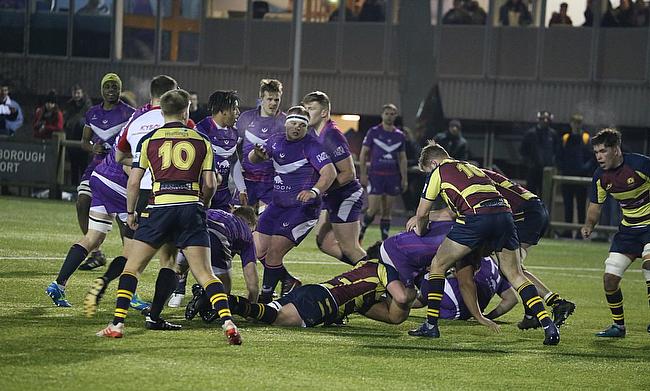 Northumbria University remain at the summit of the BUCS Super Rugby table after they produced a remarkable comeback to clinch victory over Hartpury.

Darren Fearn’s side battled back from 14 points down to claim their 10th win of the campaign, while the University of Exeter also showed character to come through a tough encounter against Leeds Beckett.

Cardiff Met are still a point behind the top two as they beat Loughborough University in the Midlands and the University of Bath racked up 50 points in their win over Nottingham Trent University.

Below is a round-up of the BUCS Super Rugby fixtures as well as a review of the action from across our featured leagues and cups.

Northumbria University are now one point clear at the summit of BUCS Super Rugby as they came from behind to stun Hartpury at Kingston Park.

The visitors took a 14-0 lead into the break, but the hosts hit back to seal a sensational victory.

Yaree Fantini (2), Mike Walton and Ed Bloodworth all went over for tries for Darren Fearn’s side.

Hartpury scored three tries, but saw a 19-5 lead slip away from them in the North East.

The University of Exeter were made to battle against Leeds Beckett before emerging as narrow winners at Topsham.

Stung by an early Beckett try, Exeter responded through a Max Himbury score to nudge Keith Fleming’s side ahead.

A penalty and a second score for the away side saw Beckett go in front, but a penalty try awarded to Exeter made it 14-13 to the hosts at the break.

Both sides exchanged kicks after the restart before a third penalty of the day for Beckett gave them a two point advantage heading into the final 10 minutes.

But, following waves of pressure from Exeter, they eventually rumbled over to score the decisive try which earned them a crucial victory in their bid for the BUCS Super Rugby title.

Cardiff Met continued to put the pressure on the frontrunners in BUCS Super Rugby following a hard-fought victory over Loughborough University in the Midlands.

Harry Johnston went over early for Cardiff Met before a sensational score from Matt Marsh gave the visitors a 14-0 lead at the break.

Both teams swapped penalties after the interval before Loughborough brought themselves back into the contest following a try from Callum Watson.

However, Ben Williams touched down for Cardiff Met to give them an 11-point lead which they held on to despite Tim Bitrim’s effort late on.

Jack Davies’ double led the University of Bath to their first win of 2018 in BUCS Super Rugby following a bonus-victory against Nottingham Trent.

Charlie Dunbar, Davies and Tom Doughty crossed in the first half before Bath dominated the second period, scoring four tries, including Davies’ second.

Miles Reid, Austin Hay and Will Partington also scored in the second half.

Nottingham Trent trailed by just six points at half-time after tries from Jon Broberg and Scott Hall as well as a penalty from Will Sutton, but scores from Alex Crocker and Harry Graham were only a consolation for the Midlands side.

Hartpury 2nds are no longer clear at the top of South A following a 40-33 defeat against the University of Bristol. It means Bristol stay third in the table, but they are now just three points off the league leaders whilst second placed Cardiff University are level on points with Hartpury after they edged out rivals Swansea 13-10. Elsewhere, USW clinched a 43-34 win over Bath 2nds to stay in the title race and UWE have finished bottom of this division after a 22-12 loss to Exeter 2nds.

In North B, the University of Glasgow are now four points behind league leaders Leeds Beckett 2nds after a 31-29 win away at Durham 3rds while Beckett’s match with Loughborough 3rds was postponed.

Hartpury 3rds could not clinch the South B title this week as they fell to their first defeat of the season (41-10) away at Exeter 3rds. It means the Gloucestershire side now require two points from their final two games of the season to be crowned champions after Cardiff Met 2nds kept their faint hopes of finishing top alive with a 66-39 win over St Mary’s. Meanwhile, the University of Portsmouth thrashed rivals the University of Southampton 48-0.

It was also cup week for some of our featured Men’s teams across BUCS. In the Northern Conference Cup, Manchester 2nds and Leeds Beckett 3rds are through to the last four after victories over York St John and Edge Hill University, respectively. Newcastle 4ths’ match with Manchester Met was postponed as was Leeds Beckett 4ths’ visit to Northumbria 2nds.

In a re-run of last year’s final in the Midlands Conference Cup, De Montfort University got the better of the University of Northampton once again as they won 14-7 at TMPD Park. The holders will face Nottingham Trent 3rds in the semi-finals after they beat Oxford Brookes 2nds 36-21 while in the other last four tie, Oxford Brookes’ 1st XV will take on Harper Adams 2nds following wins against Nottingham 2nds and Aston University.

Matches in Northern 1A, Northern 2B and Northern 3A were all postponed this week.