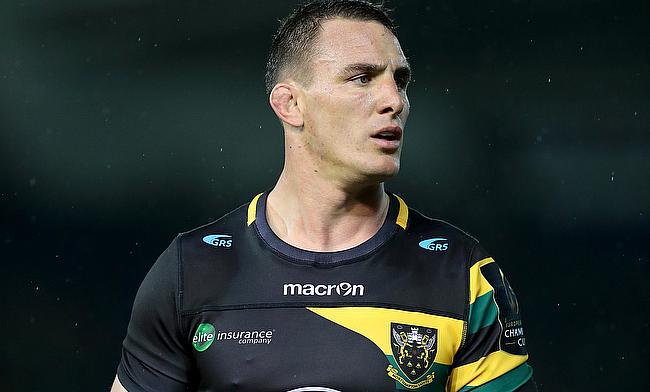 Northampton Saints held their nerve in a tight finish as they overcame second half resurgence from Gloucester to win their Aviva Premiership encounter 23-20 at Franklin's Gardens on Friday.

The result would have been very different for David Humphreys' men but James Hook missed a penalty kick with five minutes to go allowing Northampton Saints to register their third win.

The game was not without controversy as referee Tom Foley overruled the initial advice given to him to allow Louis Picamoles the first try of the game while fly-half Stephen Myler added a conversion and a couple of penalties to take Northampton Saints to 13 points at half time.

Scotland skipper Greig Laidlaw, who missed two penalties in the first half, finally managed to get across one as at half time, Northampton Saints had a lead of 10 points.

In the second half flanker Jacob Rowan and wing Charlie Sharples rumbled across the line and with Laidlaw finding form, Gloucester managed lead for the first time in the game with a scoreline of 16-20.

However, Tom Kessell, made an impactful try in the 68th minute and Myler's conversion ensured the Saints leaped forward once again following which Hook failed to score the penalty for Gloucester in the 75th minute to miss the chance of levelling the scores.

The win has taken Northampton Saints to the fifth position in the table.

Northampton director of rugby Jim Mallinder hailed his team for delivering under pressure. However, he believes the best is yet to come from the Franklin's Gardens outfit.

"It was a close game. Gloucester showed some really good line speed in defence and put us under pressure.

"We didn't control the ball, we conceded a couple of tries which were loose, but we got there in the end. The subs did really well: Paul Hill, Dylan Hartley and Api (Ratuniyarawa) made an impact and that put them under pressure.

"Louis Picamoles has continued to impress. Some of his offloading skills are sublime; the pass to Kessell was outstanding today. He is world-class.

"We are not playing at the top of our game, but we have the players - we have done it before."

Gloucester sign Andrew Davidson from Edinburgh ahead of 2021/22 season