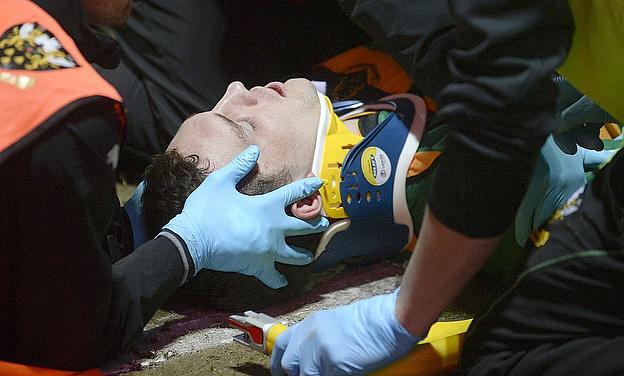 George North has suffered a series of head injuries
©PA

Northampton will await expert opinion before deciding when George North will next play after confirming the Wales wing will miss Saturday's European Champions Cup quarter-final at Clermont Auvergne after his latest head injury.

North has been knocked unconscious three times in recent months, including in last Friday's 52-30 win over Wasps, and was on Wednesday being assessed by a neurologist.

"We won't play him at the weekend," Saints director of rugby Jim Mallinder said.

"Clearly he had a nasty knock. He did get knocked unconscious for a very short period of time. Thankfully he was well looked after, he came round very quickly and has had no real bad adverse after-effects. But even so, we won't play him this weekend.

"He's making good progress. He's improving and down there at the moment going to see a neurologist and we'll wait to see what the experts say.

"We've got to make sure the medical experts are happy and satisfied that he is fit to return to play and as soon as they say he is, then we'll be happy to pick him again."

North left the field unconscious after scoring the second of two tries in Saints' win, with Wasps forward Nathan Hughes sent off for dangerous play as the Wales wing touched down.

Hughes protested his innocence but on Tuesday was banned for three weeks.

North also suffered blows to the head on Wales duty in the autumn and during the RBS 6 Nations when twice he had head knocks in the opener against England, controversially continuing before being stood down for the Scotland clash.

Former World Rugby medical adviser Dr Barry O'Driscoll says North - the top try-scorer in the competition with seven this season - should not play again this term.

Mallinder is not unduly concerned but will await medical opinion.

"There's been lots of opinion over the last few days in particular," Mallinder said.

"We've got to be careful that we don't blow anything out of proportion.

"It's a tough game. George has said that himself. People who play the game understand that there are inherent dangers, I suppose, of playing.

"We're always going to have incidents but player welfare will always come first. We will make sure we follow all protocols."

North might have been eligible for Saturday's match, had he passed the return to play concussion protocols.

Mallinder added: "If it was his first one (concussion) then we would be considering him, if he passed all the protocols that he had to and was available.

"Seeing as it's not his first then it's the sensible thing to take specialist opinion."

Mallinder was reluctant to comment on Hughes' three-week ban - a punishment which left his Wasps team-mate James Haskell to tweet "astounded would be an understatement" - but insisted he did not want to see the incident repeated.

Mallinder said: "I said at the time I think it was a red card offence. I still do. The disciplinary process has taken place and that's what he's got.

"You've got to be very, very careful. George North scored a try and therefore there wasn't much anybody could do about that.

"You've got to make as much effort as you can to get away from that incident. We don't want that happening again."

The English champions will, without North, bid to end Clermont's 22-game unbeaten run in European competition at Stade Marcel-Michelin.

Two previous meetings have been won by the Frenchmen, who have never lost a home quarter-final in the competition.

Mallinder said: "It is going to be a massive challenge but we have had a few of these challenges over the years.

"I know when we have got a big game because you see in training when the intensity goes up.

"We have got a lot of players used to playing in big games. We are looking forward to it."