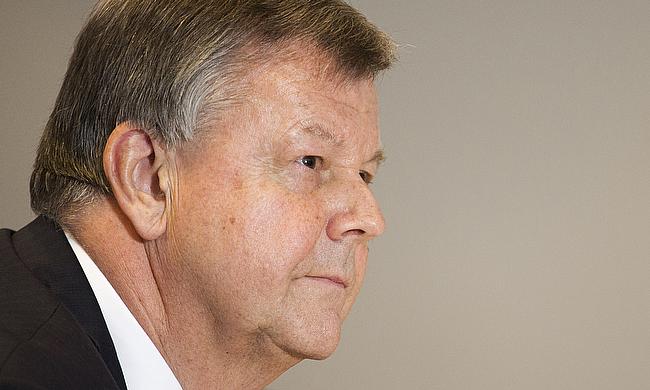 Outgoing Rugby Football Union (RFU) chief executive Ian Ritchie said he had no regrets over the appointment of Stuart Lancaster as the head coach during his tenure.

Lancaster, who has earlier handed a role to develop the youngsters by RFU was appointed as an interim coach replacing Martin Johnson following the 2011 World Cup but England's successful second finish in the 2012 Six Nations tournament saw the former Headingley hooker taking in charge of the red rose team on full-time basis with Graham Rowntree and Andy Farrell as assistant coaches.

However, England's dismal performance in the 2015 World Cup where they became the first hosting team to fail to reach the knock-out stage led to Lancaster's ouster but Ritchie lavished praise on the 47-year-old insisting that he helped the relationship between RFU and clubs develop during his stint.

"To be clear, I have no regrets about Stuart Lancaster at all, and I really feel for Stuart and what he put in and the whole coaching team," Ritchie said.

"Eddie Jones just has that knack when it comes to fine margins."

Lancaster began his role as England head coach when the team was on crisis following the 2011 World Cup where they were knocked out in the quarter-final by France while there were controversies surrounding Mike Tindall and Manu Tuilagi, who were charged for misconduct.

"I still think Stuart did a huge number of positive things, but the ultimate is what we did (at the 2015 World Cup)," Ritchie said.

When asked whether the 2015 World Cup debacle would remain the biggest black mark in his career, the 63-year-old replied, "Without question

"As a regret, a home World Cup, not getting out of the pool stages, of course, it was huge.

"We thought it would be the chance of a lifetime, and it didn't happen. And that's it.

"Like all people who lose, you need to go onto what to do to make sure you win next time.

"That motivated me. We did try to deal with that, but you'll never forget losing to Wales and Australia.

"It was a huge opportunity and we chose not to take it. But you then move on and deal with it."