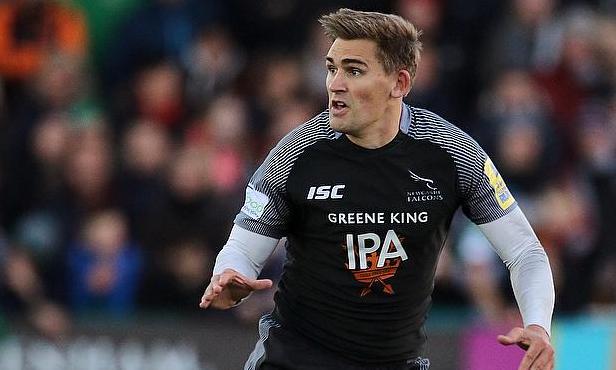 Toby Flood has recovered from a hand injury
©PA

England international Toby Flood has been named in the Newcastle Falcons line-up for the upcoming semi-final clash against Exeter Chiefs after recovering from a hand injury.

This will also be his first game in six weeks and is among the eight changes made from the game against Wasps. Kyle Cooper also returns to the line-up with Sam Lockwood and Scott Wilson come in prop. Mark Wilson will lead the side in the absence of injured Will Welch and Calum Green returns to second row.

In the half-backs backs Michael Young partners Flood, Josh Matavesi moving back to inside centre in a three-quarter line which sees Aviva Premiership Player of the Season Vereniki Goneva and Sinoti Sinoti coming in on the wings.

“The great thing is that the players share that excitement, they’re absolutely up for the game and you can feel the buzz around the whole club. Training has gone well, the sun is shining and everyone has a smile on their face. It means a huge amount to the whole club, and not just the team," said Dean Richards.

“We’ve had two weeks between games which has allowed a few niggles to be ironed out, and we’ve been able to have a proper period of preparation as well as giving the guys sufficient rest to ensure they’re fresh for Saturday afternoon.

“With it being a semi-final we can just focus entirely on one game rather than what happens the week after, the detail of our build-up has been excellent and I really feel we’re in good shape. It’s about channelling our excitement and making sure we execute our game plan, but the boys seem mentally switched on and ready to roll.”

This is the first time, Newcastle Falcons have made it to the play-off but Richards believes the win against Exeter Chiefs in the league stage will give them a lot of confidence.

“Everybody’s tipping Exeter to win but we’ve gone well away from home this season, so we’ve got a lot of belief without any of the external pressure. It’s not that we don’t have a care in the world, but we’ve certainly got nothing to lose down there. We’ll just give it our all and see what happens, and we’ve already beaten Exeter in the Premiership this season.

“In that respect it doesn’t hold any fear for us, it’s just understanding how to go about it and executing the plan down to the Nth degree. These little percentages here and there make a massive difference when you’re in semi-finals, and you can’t get away with some of the things which you might do during the regular season. This is when your detail and your accuracy really starts to count.

“That said, Exeter are an outstanding side and we have absolute respect for them. They’re are an incredibly patient and well-coached team who are happy to keep the ball for 20 or 30 phases on occasion, and they’re quite similar to ourselves in that regard.”