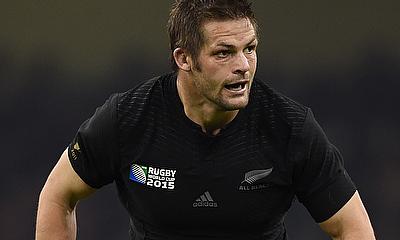 McCaw will miss his team's final Pool C game against Tonga in Newcastle on Friday after suffering a bang on his thigh during last week's victory over Georgia.

"If we were playing a final, he would be fine, but we are just not prepared to take any risks with anyone that is not 100 per cent," Hansen said.

"He got a bang on his thigh and it's just really sore when he stretches out at top-medium pace, so it is just not worth risking it.

"We've had plenty of gasps from home before, but we're okay with it and the people that are anxious about it don't need to be anxious. If this was the quarter-final, he would be playing."

Reflecting on Nonu's achievement, Hansen added: "The first conversation I ever had with him was that we don't think you're fit enough and we want you to go to sevens. He went there and changed himself.

"He went from being a blockbusting, hard-running centre to a really fit centre who could then play for long periods into the game. He's developed the skills over the period and is a beautiful passing centre as well as a blockbusting runner.

"He has grown into a leader within the group. He doesn't say a lot, but when he does speak it's right on the money. He asks a lot of himself and cares a lot about the team - and we care a lot about him.

"It's a fantastic achievement to play one Test for the All Blacks let alone 100, and he should be very proud of himself."

New Zealand have already booked a place in the quarter-finals, where they are set to face Ireland or France, although their performances to date have not been of the vintage variety.

"Physically, we will be ready, I have no doubt about that. And I know that mentally we are a strong side," Hansen said.

"So we've just got to go out, really enjoy that game (Tonga) and then look forward to whoever it is we play at the Millennium Stadium (in the quarter-final). Walk towards the pressure and enjoy it.

"That's what we play Test matches for. The bigger the challenge, the better it is. You don't get too many opportunities to play anything bigger, so we may as well look forward to that and get excited by it, which I know we are."