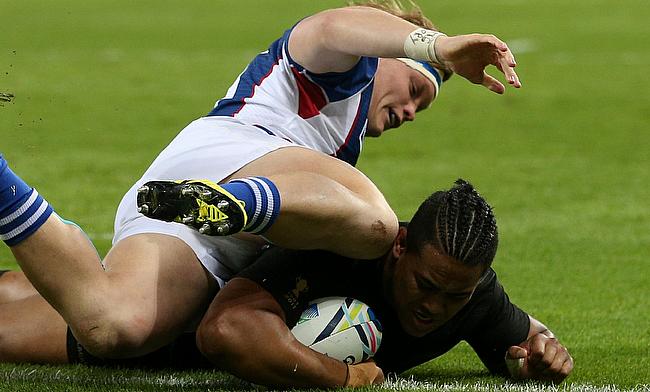 New Zealand cantered to their second win in Pool C with a 58-14 victory over Namibia at the Olympic Stadium.

The All Blacks were by no means at their best but did not need to be against the lowest-ranked team in the competition.

However, the biggest cheer of the night came in the 50th minute when the minnows scored a try against the World Cup holders.

Namibia were never in danger of causing a Japan-style shock - in fact there was talk of the All Blacks racking up a World Cup record score against them.

But the Africans, fielding eight amateurs in their starting XV, did not play like the 200/1 shots they were to win the match.

Their captain, Jacques Burger of Saracens, led from the front - and often with his face - as a succession of tackles drew a collective wince from the crowd.

And they thoroughly merited their big moment, after Burger elected to kick to touch rather than shoot for goal.

What a try it was too, the Namibians constantly attacking in one direction before suddenly switching for Johan Deysel to power over for a famous score.

No matter that a largely second string New Zealand had already racked up 41 points by then, and went on to make it nine tries for the night.

One-sided it may have been, but the days of 100-plus point victories in the Pool stages seem to be over.

Certainly New Zealand showed Namibia due respect in the fifth minute when opting to kick for goal 15 yards out - to a few jeers from the crowd.

Nevertheless Beauden Barrett did the honours, and straight from the restart Julian Savea bulldozed his way down the wing before the ball found Victor Vito for try number one.

Nehe Milner-Skudder danced his way to the second try, ducking in between two Namibian tackles before leaping over a third to score.

Namibia got on the board after 15 minutes when All Blacks skipper Sam Cane was penalised and Theuns Kotze launched his penalty between the posts.

Back down the business end, however, and Sonny Bill Williams popped up with a trademark offload to set up Malakai Fekitoa under the posts with New Zealand scoring at a point a minute to lead 22-3.

A second Kotze penalty brought some respite, only for Namibia's defence to suddenly go missing in action and allow Barrett to burst down the middle for try number four.

Milner-Skudder rounded off the first half with a score in the corner thanks to more prompting and probing from Williams and New Zealand led 34-6 at the break.

Kotze's third penalty was followed almost immediately by a try for Savea, who got the ball down underneath a heap of bodies.

Deysel then claimed a try he will never forget, but life soon got tougher for Namibia when Jaco Engels was yellow-carded and the man advantage immediately paid off when replacement Ben Smith scored in the corner.

But still the expected late flurry failed to materialise, although Savea grabbed his 32nd international try and Codie Taylor collected Milner-Skudder's delightful pass to touch down in the final minute.