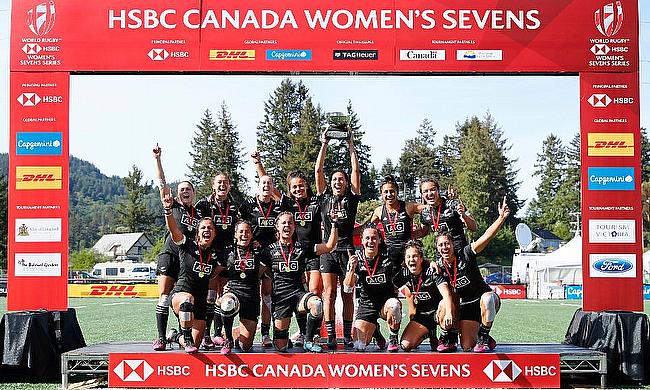 New Zealand produced a brilliant performance to beat Australia 0-46 in the final to clinch the Canada leg of the HSBC Women's Sevens Series.

The result also meant they have narrowed down the gap in the overall standings with the table toppers Australia to just four points with the final round in Paris to be played between 8th and 10th June.

HSBC Player of the Final Portia Woodman crossed over twice in the first and seventh minute while Ruby Tui (3') and Kelly Brazier (5') scored further tries for New Zealand in the first half. Tyla Nathan-Wong managed a solitary conversion but the Black Ferns headed into the break with a terrific lead of 0-22.

There was no respite whatsoever for Australia in the second half as Niall Williams with her back to back tries in the 40th and 43rd minutes extended their lead and Brazier (48') and Sarah Goss (44') followed the suit to lead them to a 0-46 victory.

New Zealand captain Goss was delighted with the win as title race is set for an enthralling conclusion in Paris next month.

“Really proud of the girls, we put in a lot of effort. We’ve been on the road for a long time so we are really stoked with the result and happy to be heading back for some recovery," she said.

"Credit to Australia as they are an amazing team. We love playing them and it just shows how amazing women’s rugby is at the moment".

Meanwhile, Australia captain Shannon Parry credited New Zealand for their dominant performance in the final and is now looking to end the series well in Paris.

"It was a very difficult loss but in saying that the kiwis were clinical today and we gave them way too much possession and that’s what they do. They are a quality team and they showed that out there today. For us it was a pretty good tournament for us besides the final, we earned our spot in the final and we played some really good footy.

“It makes it hot property when we return to Paris in a couple of weeks time, so we are really looking forward to that. It’s going to be a hotly contested tournament, it’s the final hit out before the World Cup at the end of July.”

Earlier, New Zealand topped Pool A after winning all their three games and defeated England and USA 17-12 and 10-33 respectively in the knock out stages to reach the final. Meanwhile, Australia, who topped Pool C defeated Fiji 21-5 and France 12-17 to set up the final against New Zealand.