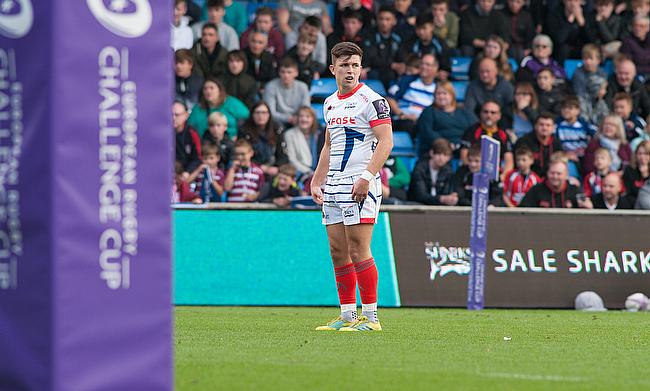 After falling to a narrow defeat against Wales in Round Three of the Six Nations, their clash with Italy provided a more successful evening for England’s U20s.

Bedford was the setting and as the rain teemed down at Goldington Road, England managed to steady the ship in the second-half as they eventually eased to a 35-10 victory against Italy.

England were of course the hosts for this fixture, but it may have felt like a home outing for the Azzurri because a high percentage of Italian families in the UK live in Bedford.

The visitors certainly acclimatised well to their surroundings in the first period as tries from Federico Mori and Michele Peruzzo helped Italy into a 10-7 lead, however, England were able to hit back on the stroke of half-time to hold a slender advantage.

In the challenging weather conditions, England could have lost their nerve, but they went on to secure a confidence-boosting victory as they aim to finish a difficult Six Nations campaign in a positive manner.

Their final outing in this year’s tournament comes against Scotland on Friday before they set their sights on the World Cup in Argentina. All 23 England players involved at Bedford last week will want to be included in Steve Bates’ plans for this summer and that includes an array of National League talent.

Before the game, Sky Sports pundit and World Cup winner Will Greenwood described Rus Tuima as a ‘monster’ and hoped the ‘camera wouldn’t lie’ in terms of his presence on the field. Greenwood wasn’t wrong.

Tuima, dual-registered with Plymouth from Exeter Chiefs, showed his excellent ball-carrying ability over the course of the 80 minutes and matched the Italian physicality in a new look-back row which included former Rotherham and Cinderford players Tom Willis and Aaron Hinkley.

The No.8 was more explosive in the second-half and one of his powerful carries led to Ollie Fox’s try. Tuima’s work rate was exceptional throughout and with a family tree which includes Red Rose and sister Lagi, as well as England winger Joe Cokanasiga, it isn’t a surprise that Tuima stood out.

England full-back Josh Hodge received Sky Sports’ Man of the Match, but it could easily have gone to Kieran Wilkinson. The Sale FC man played the weather conditions very well and set the platform for his side’s opening try.

A beautifully weighted kick through was pounced upon by Tom Seabrook and Wilkinson’s individual brilliance saw him dart over just before the break to give England the lead as well as the momentum in the contest.

Harlequins’ Marcus Smith has featured in the No.10 shirt for England during this Six Nations campaign, but with a handful of Premiership teams calling their players back for club duty last weekend, Wilkinson certainly took his chance for his country.

Sale FC teammate Nic Dolly also had an influence in the front-row. The hooker played an important role in England’s first try as a lovely reverse pass inside allowed his team to build phases before Seabrook eventually raced over.

We have witnessed Mako and Billy produce storming displays for England’s senior side over the last few years so you can see why there is also a lot of attention surrounding cousin, Manu Vunipola.

The fly-half replaced Wilkinson on Friday night and brought a new burst of energy to England’s attack. Always on the front foot, it highlighted why National One side Bishop’s Stortford have been delighted to have Vunipola on their books this term. He also kicked his first points for the U20s and the future is certainly bright for the young back.

Before you shoot us down, we have included Ollie Fox because he performed impressively on Friday night. The Yorkshire Carnegie scrum-half has featured once for Hull Ionians this term, as well as recently playing at Huddersfield, and it is easy to see why Fox is now making his mark in the Championship.

He managed the weather conditions well in Bedford with some smart box kicks and also controlled his forwards. In the second period, he showed great intelligence to scoot over and he helped orchestrate England’s second win of the Six Nations.

In between England’s fixtures against Wales and Italy, Tom de Glanville produced a Man of the Match performance for National Two North outfit Otley against Peterborough Lions. Dual-registered with Bath, de Glanville started his second Six Nations fixture at 13 and had a solid game last week.

His sleight of hand following an excellent break set-up Ollie Sleightholme’s score on 58 minutes, with help from Taunton Titans prop Alfie Petch. De Glanville moved to full-back after Josh Hodge was substituted in the second-half and his smart kicking to the corner also helped put pressure on Italy.

It could have been easy to also analyse the likes of Joel Kpoku and Samson Ma’asi who have featured in the National Leagues in recent years, but on a cold and damp night in Bedford, our NCA affiliated players both past and present most definitely shone brightly at Goldington Road.