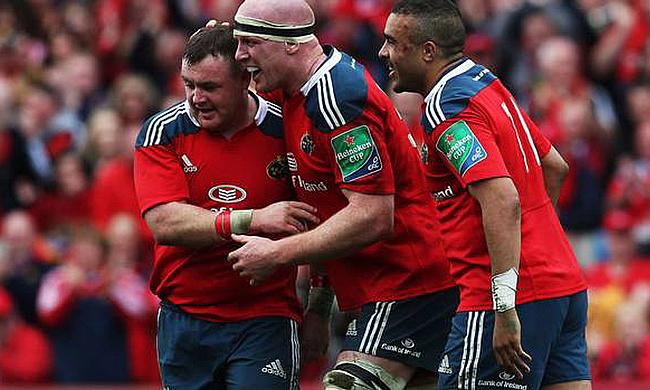 Munster maintained their top position with a dominant 33-0 victory over the Ospreys in their Pro 12 clash on Friday.

With tries from prop Dave Kilcoyne (7') and wing Darren Sweetnam (13') followed by fly half Tyler Bleyendaal's double conversion, Munster raced to 14 point lead in the first 15 minutes. The score remained unchanged at half time as both the teams failed to score in the remainder of the first half.

Flanker Peter O'Mahony extended Munster's dominance in the second half with a 53rd minute try and soon Kilcoyne strolled across the post for the second time to secure the bonus point for Munster.

Lock Robin Copeland capped off a fantastic game for Munster with another try in the 77th minute while Bleyendaal contributed with eight points overall to secure a 33-point win for Munster as Ospreys failed to score any point.

With six wins from eight games, Munster continue to top the table while Ospreys' third defeat in the season keeps them at third position in the table.

Ospreys head coach Steve Tandy was disappointed with his team's performance on Friday.

"It's bitterly disappointing. We've had a good working week. Irrelevant of the scoreboard we feel we put a performance in," he said to BBC Radio Wales.

"We couldn't win a set piece. We lost the first four or five line-outs on the bounce. We couldn't get control of the football but then in fairness, they picked out the back three.

"We didn't collect any balls, we were second to any loose balls from the forwards which is unlike us so it was a pretty disappointing night."