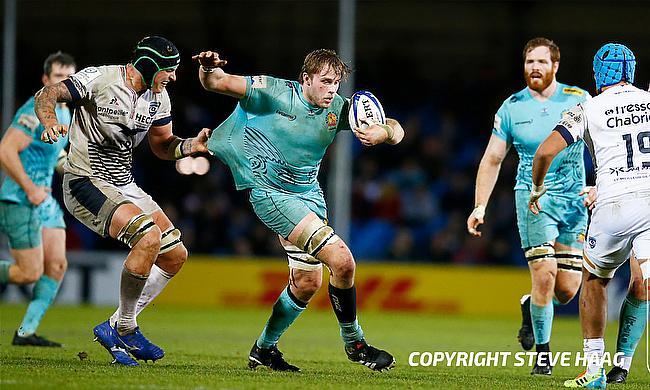 Jonny Gray scored a hat-trick as Exeter Chiefs went on to trounce Montpellier 42-6 in the Heineken Champions Cup opener at Sandy Park on Saturday.

Louis Foursans with penalties in the 3rd and 10th minutes got Montpellier off to a flying start but they could not get anymore breakthroughs for the remainder of the game.

The response from Exeter came in the second quarter with a long pass from Joe Simmonds allowed Stuart Hogg to go over the line in the 23rd minute. Simmonds also followed with the conversion as Exeter went into the lead for the first time in the game with a 7-6 scoreline.

The home side looked in better groove in the second half as they got their second try two minutes after the break with Gray diving from close range for his first of the three tries. Simmonds kicked the extras as Rob Baxter's men stretched their lead to 14-6.

Exeter were relentless as Gray got his second in the 53rd minute - similar to first - with another dive in the close range and once again Simmonds followed with the extras to make it 21-6 and at the end of the third quarter he completed his hat-trick after a quickly taken Luke Cowan-Dickie penalty.

The decision was referred to the TMO, with the on-field decision of try upheld.

Sam Simmonds could not be kept out of the game as he scored Exeter's fifth try after it was set up by Jack Nowell with his brother Joe kicking the conversion to make it 35-6 before Don Armand capped a fantastic second half with another close range finish to complete a 42-6 victory.

Exeter will be facing Glasgow Warriors in the second round on 18th December while Montpellier will host Leinster Rugby at GGL Stadium on 17th December.