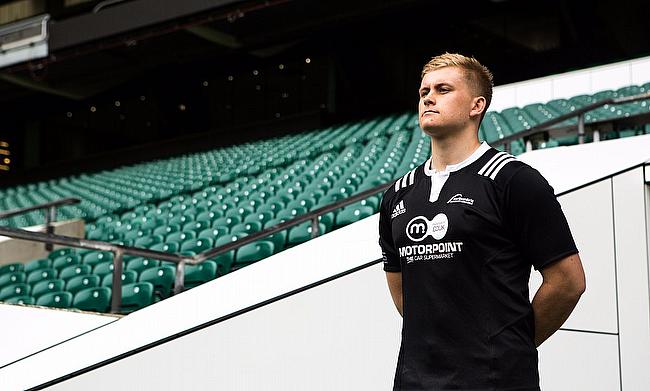 Will Muir once again starred for Northumbria
©BUCS Super Rugby

Will Muir scored a late hat-trick as Northumbria stole victory away from league leaders Exeter in a thrilling BUCS Super Rugby clash.

The winger crossed in each half before completing his trio of tries in the final play of the game to move Darren Fearn's side to within three points of the table toppers.

Cardiff Met would have been pleased to see the result in the northeast as they are now just two points behind Exeter following their commanding victory over Nottingham Trent.

Elsewhere in BUCS Super Rugby, Hartpury College edged out Loughborough and Bath battled back to clinch victory against Durham.

In the Premier Women's competition, Edinburgh maintained their 100 per cent record and Hartpury's swagger returned as both remain on top of their respective divisions.

Below is a full round-up of BUCS action as some teams played their final matches before the Christmas break.

Will Muir scored a dramatic late try as Northumbria came from behind to beat BUCS Super Rugby leaders Exeter and end a run of two straight losses.

In a game which was rescheduled to 1pm, the hosts trailed 21-20 as the clock ticked towards red.

But Muir, who had gone over twice for Darren Fearn's men, latched on to a superb pass from Jake Elwood to complete his hat-trick and snatch a crucial win for the northeast side.

Northumbria had led 15-7 at the break after tries from Oli Robinson and Muir, with last week's star man George Gosling responding for Exeter from close range.

Ted Landray landed the conversion and then added a second after half-time following Sal M'boge's clever effort as Exeter took a one point lead.

But, just as Exeter wanted to take control of the game, Northumbria rallied back as Muir completed his hat-trick either side of a penalty try for the visitors, to clinch the victory.

Exeter remain top, while Northumbria are two points adrift of Keith Fleming's side as we approach the Christmas break.

Graham got the home side’s only other score of the match shortly after, but Tom Morgan and Northmore both crossed to put Met 25-14 up at the break.

Morgan also kicked 10 points in the first period and added to his personally tally after interval as he dotted down for his second try of the match before Ben Holt added the gloss to the scoreline late on.

Hartpury College secured back to back victories for the first time this season in BUCS Super Rugby as the current champions beat Loughborough.

College won the league and cup double last term, but after losing some of their stars from last year, Hartpury have struggled to recapture that quality.

However, quick fire tries from Tom Pashley and Maliq Holden sealed victory for Hartpury against their old rivals Loughborough after they had fallen behind to a Jon Hughes try midway through the second half.

Bath inflicted a second straight defeat on Durham as the hosts fought back to win a pulsating BUCS Super Rugby clash.

Will Hughes dotted down and Austin Hay barged his way over as Bath took control early on.

Hughes scored a stunning solo try just before the 20 minute mark, but Joe Duffy and Justin Clegg crossed as Durham rallied back before the visitors were rewarded a penalty try to end the first period level.

Ben Fowles then gave the away side the lead at the beginning of the second half, but two penalties from Will Flinn as well as converted score from Chris Berry proved to be enough for Bath who clinched their second successive win.

Newcastle’s lead at the top of North A has been cut to four points as second placed Durham beat their near neighbours 26-17. Third placed Leeds lost a small amount of ground in the race for top spot as they had to settle for a 24-24 draw with an Edinburgh side which is now unbeaten in their last three matches. Elsewhere in the division, Birmingham secured their second win on the trot as they shocked fourth placed Nottingham with a 15-12 victory while Loughborough 2nds fell to a 32-29 defeat away at Bishop Burton.

In South B, Cardiff’s advantage at the summit has been increased to three points as they claimed a 36-10 win away at UWE while Bristol, who currently occupy second spot in the table, were comfortably beaten 31-5 by USW. There was not a trio of Welsh wins in this division on Wednesday as Swansea lost 23-19 to Exeter 2nds while in the other fixture, Hartpury 2nds edged out Bath 2nds 13-7.

There were two games in North B this week and Leeds Beckett 2nds and Glasgow are now on level points at the top of the table. Glasgow made it five wins in a row thanks to a 28-22 win over their Scottish counterparts Strathclyde while Leeds Beckett beat Durham 3rds 48-21. In South B, league leaders Hartpury 3rds were awarded a walkover victory against King’s College to maintain their 100 per cent record this term while Exeter 3rds are now eight points off the top following a 39-21 win away at Portsmouth.

With no fixtures in Northern 1A until the end of January, our round-up moves straight to Northern 2A as table toppers Keele suffered their first loss of the campaign. The Staffordshire side fell to a 33-10 defeat against rivals Manchester Met meaning Rob Jones’ men are now just three points behind Keele with a game in hand. Below the top two, Lancaster beat Bangor 30-14.

In Northern 2B, Newcastle 3rds’ gap at the top has been cut as they lost 26-24 to second placed Leeds Beckett 3rds in an excellent game at West Park Rugby Club. The other fixture between Leeds 2nds and Sheffield 2nds was postponed.

Manchester 2nds made it five wins in a row to stay top of Northern 3A following a 15-6 win over Liverpool John Moores while Edge Hill thrashed Liverpool 3rds 50-0. In Northern 3B, Leeds 3rds against leaders Leeds Beckett 4ths was called off so Newcastle 4ths took advantage by reducing the lead at the top to six points following a 43-5 win at home to York St John.

Midlands 2A leaders Harper Adams have one more game to go before the Christmas break, but they maintained their 100 per record for the season on Wednesday thanks to a 32-17 win over Warwick 2nds. Their margin at the top is now six points after Nottingham 3rds were beaten 26-15 by city rivals Nottingham Trent 4ths while Birmingham 3rds eased to a 43-10 win over Oxford Brookes 2nds.

In the Women’s top divisions, current champions Edinburgh will head into 2018 having won all eight of their fixtures so far this season. Their latest triumph came in the form of a 55-5 win over Loughborough in North Premier while Durham remain second in the table after cruising to a 66-0 victory against Newcastle. In South Premier, leaders Hartpury thrashed Gloucestershire 82-0 and Cardiff Met  picked up a crucial 38-7 win against Bristol as they keep their sights set on a top two finish.