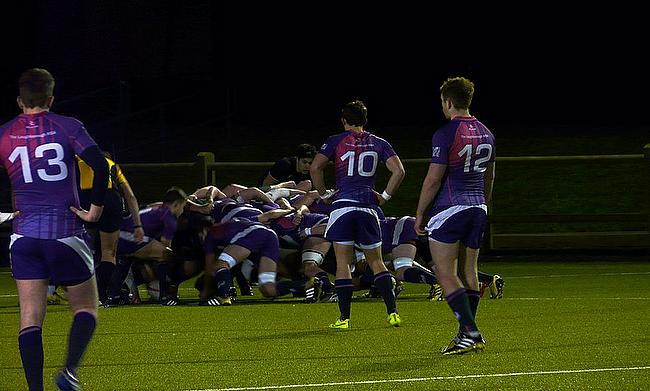 Durham had battled their way back into the game after the interval, but Loughborough were able to control the second-half after an excellent first 40 minutes.

In the Women’s top leagues, Hartpury remain rampant while Durham and Northumbria closed the gap at the top of Premier North.

Also this week, there was cup action for some of our featured men’s sides including Manchester Met, who began their defence of the Northern Conference Cup.

Below is a full round-up of BUCS action:

Loughborough University produced a brilliant first-half display against Durham to seal their third win of the BUCS Super Rugby season.

Loughborough dominated the first half and deservedly led 19-3 at the break with Tom Ffitch, Tom Bitrim and Alex Glashan going over while Tom Catterick landed a penalty for the hosts.

A converted Ben Fowles try saw Durham hit back immediately after half-time, but Will Foster’s try shortly after saw Loughborough home with some ease.

The Midlands side now sit fifth in the division ahead of their clash with newcomers Nottingham Trent next week while Durham remain a place behind Loughborough.

After Loughborough’s win away at Bath in October, Head Coach Gerard Mullen said that his side put in an excellent performance at the Rec and this was yet another solid display on the road.

Ffitch’s converted try was just rewards for Mullen’s side after making a strong start at Durham City RFC and chances to add to their lead in the first period were gratefully received.

Durham, who have won just one of their last four home games, were conservative in reply and were punished for not breaking down Loughborough when Birtim crossed on 26 minutes.

While Catterick replied three minutes later with the boot, Loughborough went into the interval in control thanks to Glashan’s try.

Excellent forward play by the hosts allowed Folwes to go over five minutes after the restart, but any hopes of a comeback were dashed when some fine finishing from Foster proved to be Durham’s undoing.

The home side then went on the offensive, but Loughborough were able to stand firm in defence as Alex Keay’s men pressed for a way back into this contest.

And with the weather deteriorating, Loughborough were untroubled in the final 10 minutes of the match as the Midlands side headed back to Epinal Way with the points.

Centre Tom Morgan scored a try in the first half while Luke Northmore and Ben Williams made the points safe at West Park.

The visitors had trailed 8-7 at half-time due to a Connor Lloyd penalty and a try by the in-form Dan Leake, but Beckett rallied with second-half tries from James Elliot and Tristan Lloyd to secure a losing bonus point.

Exeter responded to their defeat against Leeds Beckett with a seven-try hammering of Bath at Infield.

The visitors, who suffered their first loss of the season last week, struck first as Jack Stong went over and Ted Landray converted.

Tries from Jack Rouse and James McRae put Exeter further ahead by the break and the latter crossed for his second soon after. Felix Maddison, Mike Haines and Rouse followed and Landray added four conversions.

Bath’s only score came in the first period via Jake Allen, but after their maiden victory last week, the Blue and Gold were brought back down to earth on Wednesday.

After winning the league and cup double in 2016/17, Hartpury have failed to build on that success but three first half tries gave them a 19-12 lead in the Midlands.

Scores from Max Craven and Cecil Maccarthy kept Trent in touch, but College were well in command in the second period.

The current holders crossed on five more occasions to seal a welcome victory, while Nottingham Trent are now the only side in BUCS Super Rugby who remain winless.

Newcastle stay a point clear at the top of North A after they thrashed Edinburgh 50-12 away from home to pick up another bonus point. Leeds kept the pressure on the league leaders as the second placed side edged out Durham 2nds 26-22 while Nottingham sit third following a 32-15 win against Loughborough 2nds. The other fixture in this division saw Bishop Burton move off the bottom of the division following victory at Birmingham.

Cardiff maintained their 100 per cent start to the season in South A as the table toppers beat South Wales rivals Swansea 20-8. It is now the fifth win on the trot for Cardiff who hold a four point lead at the summit following Bristol’s 34-29 defeat at Hartpury 2nds. Fourth placed Exeter 2nds thumped bottom of the table UWE 59-14 while USW put in an excellent defensive display as they beat Bath 2nds 24-0.

In North B, leaders Leeds Beckett 2nds were held to 24-24 draw away at Manchester, but despite the Yorkshire side dropping points, they extended their lead at the top as second placed Strathclyde suffered back to back defeats as they lost 28-17 against Durham 3rds. Meanwhile in the division, Glasgow profited as they narrowly beat fellow Scottish side St Andrews 27-25.

Exeter 3rds made it four wins from four in some style as they demolished King’s College 97-0 to stay top of South B.  Hartpury 3rds are a point behind the Green and Whites after a 25-14 win at Cardiff 2nds while third placed St Mary’s eased to a 57-0 victory against winless Portsmouth.

Sheffield have gone top of Northern 1A after a convincing 69-5 win against title rivals Newcastle 2nds. The northeast side remain level on points with Sheff and they are now six points clear of Liverpool who beat Durham 4ths 21-6. The other result in this league saw Sheffield Hallam draw 24-24 with Hull.

In Midlands 1A, Leicester made it five wins on the spin after a 40-30 win away at bottom of the table Birmingham 2nds while Warwick picked up successive victories following their 17-10 win against Worcester. Elsewhere, fourth placed Coventry are now just a point behind the top three after a 17-7 triumph at home against Nottingham Trent 2nds.

In the Premier Women divisions, Durham gained some ground on Premier North leaders Edinburgh as they beat Newcastle. The Scottish side weren’t in action this week so the only other fixture that took place saw Northumbria thrash Birmingham 72-7.

In Premier South, Hartpury added to their 99-0 victory against Bristol by thumping Gloucestershire 135-0 to stay four points clear of Cardiff Met who beat the aforementioned Bristol 53-7. The other result in this league ended Exeter 36-10 Oxford.

In the Northern Conference Cup, holders Manchester Met are through to the Round of 16 following a 31-17 victory over Newcastle 3rds, but last year’s semi-finalists, Keele, are out after a 34-21 defeat away at Newcastle 4ths. Fellow Northern 2A side UCLan were also eliminated as they were beaten 57-12 by Manchester 2nds.

In the Midlands Conference Cup, Midlands 2A league leaders Harper Adams continued their winning streak as they beat Derby 55-5 while there was an all Nottingham Trent affair as their 3rds beat their 4ths 38-19.