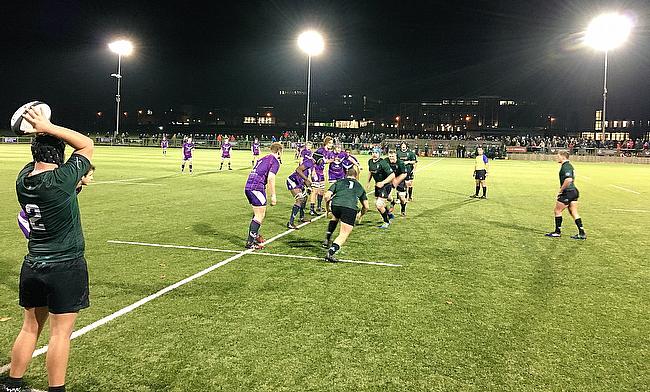 Hooker George Gosling scored a hat-trick as Exeter extended their lead at the top of BUCS Super Rugby with an impressive win over Nottingham Trent.

Keith Fleming’s side ran in eight tries to secure their eighth win of the campaign, as the visitors suffered their ninth straight defeat and Trent are also still without a victory since joining the division.

Arguably, fixture of the week came in Wales as Cardiff Met beat Northumbria to move second in table while after being top two weeks ago, the northeast side are now fourth in the table.

Meanwhile, Leeds Beckett are into the top three despite seeing a 22-5 lead disappear as Bath battled back to claim a draw in Yorkshire while Hartpury College picked up a welcome win at Durham

In the Women’s divisions, Edinburgh once again got the better of Northumbria and Exeter are now neck and neck with Hartpury in Premier South.

Exeter produced a composed and clinical performance as they secured a comfortable win over Nottingham Trent to move six points clear at the top of BUCS Super Rugby.

Gosling completed his hat-trick in the second-half before Mike Haines and Callum Young added further tries at Topsham.

A penalty try was all that Nottingham Trent could muster up in a much improved performance after the break.

After recent wins against Cardiff Met and Loughborough, Exeter continued to look impressive as last year’s finalists strengthened their position at the summit.

And all the signs began pointing to an Exeter win after the first 40 minutes as Keith Fleming’s side sparked into life after a slightly slow beginning.

Exeter powered their way over the Nottingham Trent defence and across the whitewash for Gosling to open the scoring before Pierre-Rou latched on to a lovely pass from Simon Linsell to dive into the corner.

The hosts demonstrated their excellent attacking intent four minutes later as another well-time pass allowed Gosling to burst past attempted tacklers to score under the posts.

Exeter continued to be rampant and they wrapped up the bonus point when Bagwell sniped his way over before Maddison completed the scoring for the first period following a neat offload from Jose Pieterse.

With nine minutes gone in the second half, Gosling barged his way over to notch his hat-trick before Mike Haines weaved his way through the Trent defence to dot down.

The high Exeter tempo was reduced slightly when Nottingham Trent’s endeavour produced a Penalty Try, but the hosts had the final say on proceedings as a clever maul yielded Young’s score to complete the rout.

Cardiff Met scored six tries as they eventually saw off Northumbria in Wales.

Met led 26-7 at the break as the hosts scored on four occasions, two of which came via Luke Northmore and Harry Johnston, while Tom Morgan kicked six points in the first half.

Northumbria then produced a response after the interval as two converted tries and a penalty brought them to within two points of the home side.

However after a manic opening 15 minutes, Danny Milton’s men held their composure and they were able to take the game away from the visitors thanks to two Morgan penalties and tries from Alex Dombrandt and Max Llewllyn.

Bath snatched a dramatic late draw against Leeds Beckett to deny the visitors the chance to go second in the BUCS Super Rugby table.

Beckett led 5-0 after a tight and tense first half thanks to Zach Scott-Gray’s try.

James Elliot crossed to extend the hosts’ lead before Chris Barry spotted a gap in the Leeds Beckett defence to cut the deficit.

A Kieran Davies penalty and Harry Robinson’s converted try then gave the home side a 22-5 lead, but Beckett were denied the win following a touchdown from Levi Davis and two scores from Finn Murphy.

The champions have struggled to recapture the form that saw them win the league and cup double last term, but they were able to see off the challenge of Durham in the northeast.

The hosts are now sixth in the table and find themselves 16 points behind the top four places at the halfway point in the campaign, while College remain eighth in the table after this away triumph.

Newcastle made it difficult for themselves on Wednesday afternoon, but they secured a 22-17 win over Nottingham to move them 10 points clear at the top of North A. Durham 2nds sealed their fifth victory of the season as they beat Bishop Burton 36-15 to move up to second in table while Leeds lost 36-15 away at Birmingham. The other result in the division saw the improving Edinburgh clinch a narrow 33-31 triumph away at Loughborough 2nds.

The University of Bristol remain at the summit of South A as they held on to beat UWE 26-22. The league leaders had led 26-7, but managed to keep their nerve to secure their seventh victory of the term. Second placed Cardiff thrashed Bath 2nds 57-7 to keep the heat on Bristol while Hartpury 2nds won 34-5 against Exeter 2nds and Swansea beat rivals USW 31-18 at Sketty Lane.

There were just two fixtures in North B this week and Glasgow went to the top of the division following a 49-24 triumph over Manchester while it was a much closer affair up in Scotland as St Andrews edged out Durham 2nds 30-28. In South B, Hartpury 3rds are now seven points clear at the summit after beating St Mary’s 27-5 in a top of the table clash while Cardiff Met 3rds won 13-7 against Exeter 3rds. Elsewhere, Southampton were awarded a walkover result against King’s College.

We are that time of year where postponements start creeping into university rugby fixtures and there were two in Northern 1A as Newcastle 2nds v Liverpool and Sheffield v Sheffield Hallam fell foul to the weather. However, there was one game that did take place and that was in Durham as their 4th team beat Hull 27-17 to move up to third in the division.

In Northern 2A, Keele increased their lead at the top to eight points as they saw off Liverpool 2nds 24-3 while fourth placed Lancaster picked up their second win of the campaign as they beat UCLan 42-27. Both Newcastle 3rds against York and Leeds 2nds’ trip to Northumbria 2nds were called off in Northern 2B, but Sheffield 2nds game with Leeds Beckett 3rds did go ahead and it was the visitors that left the Steel City with a 25-13 victory.

In Northern 3A, Manchester 2nds remain top, but they were given a scare by city rivals Manchester 3rds. The 3rd XV are bottom of the division and they so nearly clinched their first win of the campaign, but narrowly lost 38-33 to the league leaders.

Northern 3B leaders Leeds Beckett 4ths suffered their first defeat of the season as they lost 41-36 at home to York 2nds while second placed Newcastle 4ths cut Beckett’s lead to nine points as they beat Sheffield Hallam 2nds 31-19 in Yorkshire.

In the Midlands leagues, Leicester continue to dominant 1A as they secured their sixth win of the season, beating Nottingham Trent 2nds 50-14. The league leaders are now 11 points clear despite Warwick’s 25-23 win away at Birmingham 2nds. The other result in the division saw Coventry maintain their good recent form as they clinched a 20-7 win over Worcester.

In 2A, Nottingham 3rds closed the gap at the top to two points as they beat Warwick 2nds 32-5 while Nottingham Trent 3rds missed the chance to stay in touch with their near neighbours as they lost 12-7 to Birmingham 3rds, which was the visitors’ first victory of the campaign.

In the Women’s top divisions this week, champions Edinburgh made it seven wins from seven in Premier North as they once again got the better of Northumbria. This was a re-run of the 2017 final at Twickenham and the current holders beat the northeast side 34-10 to move seven points clear at the summit, while second placed Durham won 26-5 at home to Loughborough.  Newcastle v Birmingham was postponed.

In Premier South, Exeter moved level on points with league leaders Hartpury following a 29-12 win away at Cardiff Met while Gloucestershire were on the end of another tough result as Bristol showed no mercy in a 69-22 victory.