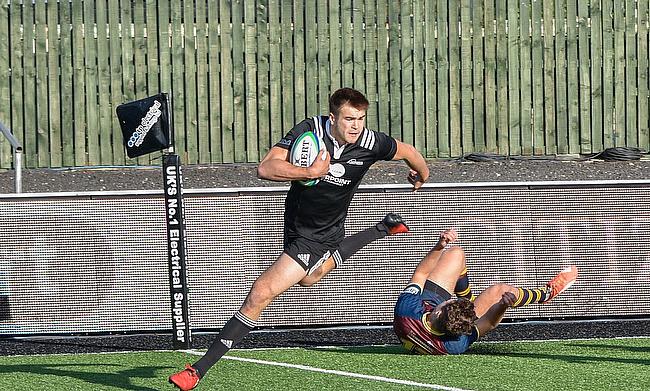 Will Muir ran in two of four Northumbria tries as the BUCS Super Rugby league leaders edged Durham to extend their advantage at the top of the division.

With their closest rivals Cardiff Met falling to a defeat at Exeter, Darren Fearn’s side are now two points clear at the summit after seven matches.

The aforementioned Exeter leapfrogged Met into second place while Leeds Beckett beat Hartpury College away from home and Loughborough cruised to a victory against Nottingham Trent.

There was more good news for Northumbria’s Women’s side as they closed the gap at the top of Premier North while in the South; front-runners Hartpury suffered a surprised defeat against Exeter.

Northumbria extended their lead at the top of BUCS Super Rugby with an enthralling bonus-point win over Durham.

The hosts have enjoyed a flying start to the season and led this contest 22-13 at the break thanks to tries from Ed Bloodworth and Will Muir, while Jake Rodgers kicked 12 points.

Tristian Rawcliffe’s score and Tom Catterick’s boot kept Durham in touch, but they fell further behind in the third quarter as Muir and Josh Bragman crossed for Northumbria.

Cai Devine and Joe Burdis went over late on for Durham, but those scores were merely a consolation as Northumbria moved two points clear at the top.

Exeter ran in three second-half tries to recover and beat Cardiff Met in an enthralling game at Topsham.

Met, who entered this clash having won their last five matches, scored twice in the opening period to lead 17-7, before the visitors crossed for their third try after the break.

But then the fightback began for Exeter. Sal M’boge’s first half try was added to by Jack Rouse to cut Met’s led to 10 points, and scores from George Gosling and Max Himbury put Exeter 26-24 up.

Ted Landray’s late penalty settled any nerves Keith Fleming’s side may have had as Exeter completed a remarkable comeback.

The game was level at 13-13 at the break with Hartpury’s try coming through Maliq Holden while Dan Leake crossed for Beckett after a lovely kick through by Christian Lloyd.

College put themselves in front after half-time as Elias Caven’s try was converted by the reliable Charlie Chapman, but Beckett hit back.

A monster penalty by Kieron Davies was followed up by scores from Dan Kelly and Tu’ipulotu Nuku to put the visitors 30-20 up.

Chapman reduced the arrears from the tee for Hartpury, but Beckett sealed the win when Stuart Nel charged down a kick and collected to dot down.

It is now three wins from their last five games for Gerard Mullen’s men who go to within four points of fourth placed Leeds Beckett.

Loughborough scored nine tries with two each for Quinten Koster, Tom Stapley and Will Foster and the others coming via Alex Glashan and two close-ranged scores.

Trent scored three tries over their own, with Alex Goble going over in the second half, but it is now seven straight defeats for Neil Fowkes’ side.

North A league leaders Newcastle suffered only their second defeat of the season as Bishop Burton earned a 20-15 win in Yorkshire. The defeat leaves the table toppers two points clear of Leeds who failed to take advantage as they slipped to a 39-26 home loss against third placed Nottingham. Elsewhere in the division, Durham 2nds held out to beat Loughborough 2nds 21-20 while bottom of the table Birmingham were handed a walkover victory against Edinburgh.

Bristol are the new leaders in South A after ending Cardiff’s 100 per cent start to the season. Last year’s BUCS Super Rugby play-off finalists won 26-7 to go to the summit, but they still have Hartpury 2nds hot on their heels after College beat Swansea 31-17. Bath 2nds are now level on points with Cardiff after an excellent 36-28 triumph over Exeter 2nds while USW defeated UWE 17-7.

Leeds Beckett stayed top of North B following a comprehensive 41-12 win over Loughborough 3rds. Beckett remain unbeaten this term and lead the way by three points after Glasgow’s 36-18 victory against Durham 3rds. Fourth placed Manchester also picked up a comfortable win as they beat bottom of the table St Andrews 41-14.

In South B, Hartpury 3rds made it five wins out of five as they beat Exeter 3rds 31-17. College’s gap at the top is three points as St Mary’s continue to hunt down the league leaders after a 34-20 win over Cardiff Met 2nds while Portsmouth grabbed the bragging rights in the derby as they beat winless Southampton 22-12.

Northern 1A leaders Sheffield clinched a hard-fought 22-18 win over Liverpool to stay on top of the pile. Despite a narrow victory, they were able to extend their advantage at the summit as second placed Newcastle lost 24-19 to Hull while elsewhere, Sheffield Hallam’s miserable run continued as they lost 46-24 at home to Durham 4ths.

There was only one fixture in Northern 2A this week and it proved to be a cracker for Manchester Met who thumped UCLan 72-7 at Lightfoot Green. Rob Jones’ men are now three points behind league leaders Keele and they seem to have put their opening day defeat behind them.

There was a full round of action in Northern 2B as table toppers Newcastle 3rds made it five victories on the spin as they beat local rivals Northumbria 2nds 32-17. This was a clash between first and second place in the division and Newcastle have now opened up a six point lead. There was another fixture between neighbours on Wednesday as Leeds Beckett 3rds got the better of Leeds 2nds with the former winning 32-24 while the other result in this league ended Sheffield 2nds 22-17 York.

In Northern 3A, Liverpool John Moores secured back to back victories with thanks to a 43-7 win over Manchester 3rds while Northern 3B, there was a full list of fixtures.

With the top two of Leeds Beckett 4ths and York St John not in action, third placed Newcastle 4th capitalised in some style as they thrashed York 2nds 90-0 while Sheffield Hallman 2nds picked up their first win of the season as they secured a crucial 38-13 victory over Leeds 3rds.

In the Midlands, Leicester suffered their first defeat of the campaign in 1A as they lost 19-12 away at an in-form Coventry. This was the league leaders’ first loss in 16 matches, but a side that arrested a run of three successive defeats were Worcester who edged out Birmingham 2nds 21-17. In Midlands 2A, Harper Adams made it four wins on the trot as they beat Birmingham 3rds 36-19 and Nottingham Trent 3rds secured their third win of the season as they clinched a 33-14 victory away at Warwick 3rds.

In the Women’s divisions, Northumbria closed the gap on Edinburgh as they eased to a 88-7 win over Newcastle in Premier North while Loughborough took the spoils in the Midlands as the beat Birmingham 87-5.

It was a much closer affair in Premier South as league leaders Hartpury lost their first game of the campaign as they were beaten 22-10 by Exeter. Considering College had scored 234 points in their previous two games, this was a great result for the Green and Whites. The other fixture in the South saw Oxford secure a 22-14 win over Bristol.