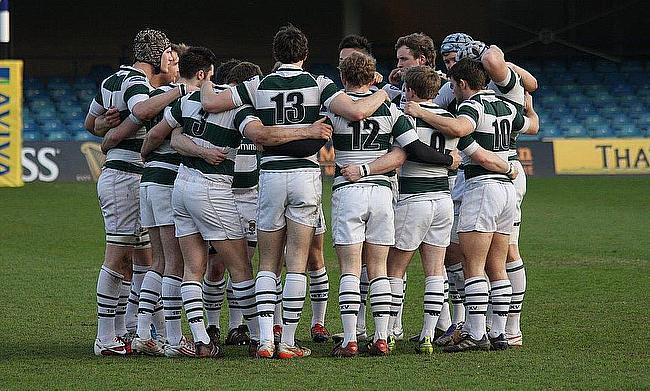 Exeter battled their way to a victory at Topsham
©TalkingRugbyUnion

Exeter had to come from behind against reigning BUCS Super Rugby champions Hartpury College before claiming their fourth consecutive victory of the season.

The latest win for Exeter leaves them second in the table, behind league leaders Northumbria who also had to fightback to beat Bath. Elsewhere in university rugby’s top division, Tom Morgan guided Cardiff Met to their latest victory and late try for Leeds Beckett clinched vicory over Loughborugh.

In the Women's top leagues, champions Edinburgh edged out last year’s finalists Northumbria and Bristol produced the result of the round as they racked up a century of points against Gloucestershire.

Exeter produced a superb second-half comeback as they saw off Hartpury College to secure their fourth successive win in BUCS Super Rugby.

Keith Fleming’s men trailed 15-8 at half-time with the reigning champions going over twice while Exeter’s points came via the boot of Ted Landray and a Sal M’boge try.

The away side continued to extend their advantage after the break as they sealed their try bonus-point, but indiscipline allowed Exeter back into the contest.

A penalty try was swiftly followed by a well-worked Mike Haines score before Max Himbury went over to level things up.

Callum Young gave the hosts the lead and despite Hartpury scoring their fifth try of the afternoon, Kieran Kelly’s score settled the contest late on.

Exeter now sit second in the table and remain the only side with a 100 per cent record in the top division of university rugby. The Green and Whites are three points behind league leaders Northumbria, but they do have a game in hand over the northeast side.

As for Hartpury, their title defence has gone from bad to worse as they slipped to their third straight defeat of the season so the men from Gloucestershire will be aiming for a response when they host Northumbria next Wednesday.

This latest clash between Exeter and Hartpury was a re-run of the 2017 BUCS Super Rugby Final, but unlike seven months ago, College opened the scoring.

Hartpury may not have tasted victory since lifting the championship at Twickenham, but they showed quality in their first try which highlighted the pace and power they have in the squad.

Exeter took the lead briefly as Landray and M’boge did what they do best, but Hartpury responded with a penalty to tie the game up.

The first period then became disjointed with a number of penalties being awarded, but Hartpury claimed the decisive moment of the half as they crossed to give themselves a seven point advantage.

Their lead was to be extended as they were gifted tries by Exeter and at 27-8 up, it seemed like College’s eventual margin of victory was the only remaining point of interest.

However, Exeter roused themselves and turned this game on its head. First, a yellow card shown to Hartpury for collapsing the maul allowed the home side to exert pressure and College cracked under the waves of Exeter attack as the hosts were awarded a penalty try.

Hartpury were reduced to 13-men following that score and shortly after, Haines cantered over before Himbury strolled into the corner to get Exeter back on level terms.

Momentum was certainly with Exeter and they went ahead when Young smashed through Hartpury’s defence to touch down. The free-scoring nature of the second half continued as Hartpury cut Exeter’s lead to two points, but Sam Morley’s high kick was collected brilliantly by Kelly who dotted down to clinch victory.

James Christie scored a hat-trick as Northumbria came from behind against Bath to remain top of BUCS Super Rugby.

Exeter’s win over Hartpury means the northeast side are still at the summit, but they have played one game more than last year’s finalists.

Will Flinn slotted over his second penalty of the evening to extend the hosts’ lead to six points, but that was as good as it got for Bath as Christie sealed his hat-trick and Jamie Ross also dotted down to complete the comeback.

Cardiff Met won their fourth game in a row as an inspired Tom Morgan performance helped them overcome a strong challenge from Durham.

Morgan crossed to give Cardiff the lead and they built on their earlt lead as Harvey Scott and another try put the hosts 19-9 up at the break, with Tom Catterick kicking three penalties for Durham.

The former Newcastle Falcon's first half contribution proved valuable in the second period as Durham scored early on to cut Cardiff’s advantage.

Morgan and Catterick then exchanged penalties before Durham’s fly-half landed another three points to level the game up at 22-22.

However, it was Morgan who grabbed the limelight as he took his personal tally to 21 points with three penalties, which sealed the win for Cardiff Met.

Sam Fox’s late penalty helped Leeds Beckett claim their third win of the season as Loughborough failed to build on their victory over Bath at the Rec.

The Beckett fly-half kept his cool to slot over a penalty and snatch the win, which was the perfect response after their home defeat to Durham last week.

Jonny Teague and Johan Visser’s tries either side of a converted score from Cam Dobinson gave the visitors a slender half-time lead.

Loughborough hit back with tries from Max Hill and Tom Ffitch after the interval, but but Leeds Beckett went over in the last play of the game to seal the victory.

Newcastle moved to the top of North A after a 43-22 win over Loughborough 2nds. The northeast side are just a point clear of second and third placed Nottingham and Leeds. The Midlands outfit slipped to their first loss of the season as they were beaten 14-10 away at Edinburgh while Leeds capitalised on Nottingham’s misfortune by thrashing Bishop Burton 43-10. The other result in this division saw Birmingham secure their maiden triumph of the campaign as they edged out Durham 2nds 22-15.

In South A, Cardiff made it four wins on the spin, but they were made to work hard for their latest victory. They narrowly beat South Wales rivals USW 21-19, while second placed Hartpury 2nds remain two points adrift despite cruising to a 51-14 win away at UWE. Last year’s BUCS Super Rugby play-off finalists, Bristol, suffered their first loss of the term as they fell to a 26-25 defeat against Exeter 2nds and there was a first victory of the season for Bath 2nds who beat Swansea 22-20.

There were just two fixtures in North B this week and Strathclyde took advantage to move four points clear at the summit following a comprehensive 64-7 win against St Andrews. Meanwhile, second placed Loughborugh 3rds had to settle for a 22-22 draw with Manchester 3rds.

With no games this week in Northern 1A, Northern 2A took centre stage and Keele built on their strong victory over Manchester Met in Round One as they beat UCLan 45-10. The aforementioned Man Met reacted superbly to their opening day defeat as Rob Jones’ side thrashed Lancaster 57-0 at Platt Lane.

Northumbria 2nds just about maintained their 100 per cent start to the Northern 2B season as they edged out Leeds Becektt 3rds 29-28 in Yorkshire while in the other fixture, Newcastle remain level on points with their near neighbours after a 29-15 victory away at Sheffield 2nds.

Chester remain at the summit of Northern 3A following a 22-17 victory over Liverpool John Moores while Edge Hill made it back to back victories as they eased to a 24-0 win over struggling Manchester 2nds. It also wasn’t much better for Manchester 3rds as Liverpool 3rds beat them on Merseyside.

In Northern 3B, Leeds Beckett 4ths secured a fine 45-24 win over Newcastle 4ths to stay top of the division while both York St John and York University secured wins against Sheffield Hallam 2nds (26-17) and Leeds 3rds (38-24) respectively.

Over in the Midlands, Harper Adams made it three wins on trot to stay top of Midlands 2A following a 16-12 triumph over Nottingham Trent 3rds. That defeat for Trent allowed their city rivals, Nottingham 3rds, to create some breathing space in second place as they beat Birmingham 3rds 29-22 on their travels while Warwick 2nds picked up their first victory over the campaign as they claimed a 32-5 win over Oxford Brookes 2nds.

Elsewhere in the Women’s top divisions, Edinburgh narrowly secured a 20-17 win over Northumbria in a repeat of the 2017 final at Twickenham while Durham are now five points behind the Scottish outfit as the second placed side beat Loughborough 17-12. Also in Premier North, Birmingham are off the mark following a 22-7 win over Newcastle. In the South, Bristol clinched their first win of the season in some style as they thrashed Gloucestershire 102-7 while Cardiff Met suffered back to back defeats after losing 39-26 to Hartpury.