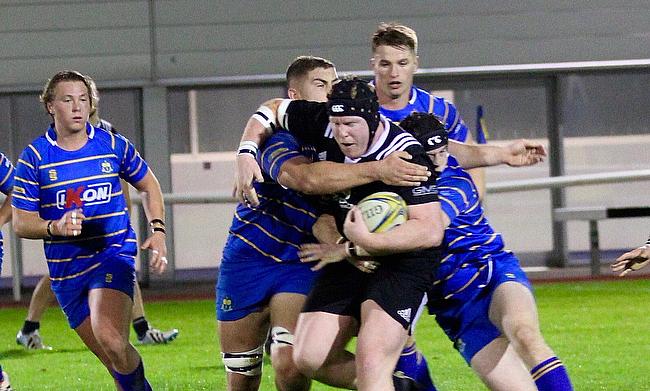 Northumbria produced a second half comeback against Hartpury College to stay top of BUCS Super Rugby.

Darren Fearn’s side won just four games last term, but they have already bettered that total in this campaign as victory over the reigning champions leaves them four points clear at the summit.

Cardiff Met are now up to second after an excellent win over Loughborough but also because Exeter suffered their first loss of the season, as they were beaten by a superb Leeds Beckett side. The other result in BUCS Super Rugby saw Bath claim their first win of the season in a dramatic game at Nottingham Trent.

Northumbria secured their fifth win of the season, coming from behind to beat Hartpury College to stay top of BUCS Super Rugby.

A penalty try put Hartpury ahead and a score from Aquile Smith gave the hosts a 12-3 half-time advantage.

But just like last week, College saw a lead slip away as Northumbria scored 33 unanswered points as the league leaders’ dominance finally told.

The visitors ran in three tries and kicked two penalties to clinch victory which leaves them four points clear at the summit.

Cardiff Met remain unbeaten at home after they claimed a 32-19 victory over Loughborough in Wales.

Loughborough, who have beaten Hartpury and Bath this season, had led 14-13 at the break with George Davis and Will Foster scoring tries.

But Cardiff Met hit back and tries from Ben Holt, Jac Arthur and Tom Benjamin helped seal the win, with Loughborough scoring a late consolation.

A Tom Morgan penalty plus tries from David Rubasniak and Corey Whane made up Cardiff Met’s points in the first period has the hosts made it five wins on the spin.

Exeter suffered their first defeat of the BUCS Super Rugby campaign as they were comfortably beaten by Leeds Beckett.

Daniel Kelly scored an early try for the hosts but Exeter immediately responded through a James McRae score.

Exeter put pressure on in the second half, but it was Leeds Beckett who were clinical as Dan Leake grabbed a brace.

A late try sealed victory for Beckett who have now moved above Exeter in the BUCS Super Rugby table.

Bath edged a dramatic and pulsating BUCS Super Rugby clash as the visitors scored a late, converted try to win the game in the Midlands.

Bath secured their first win of the season after five straight defeats leading into this game against newcomers Trent.

Will Flinn went over for the away side early on and his side led 15-12 at the break, with Trent dotting down on two occasions.

Both sides exchanged tries after half-time before Rob Waldon put the hosts ahead in the final 10 minutes, but a late score from Bath snatched the victory.

Newcastle’s hopes of finishing top of North A were once again strengthened as they beat Birmingham 50-17 on Wednesday. The league leaders are a point clear at the summit after their fourth win of the campaign and they continue to keep Leeds at bay after their 41-29 win away at Loughborough. Third placed Durham 2nds moved level on points with Nottingham after a 32-17 win over the Midlands side while Bishop Burton clinched their first win of the season as they beat Edinburgh 16-12.

On a good night for Welsh sides, both Cardiff and USW secured wins. The leader leaders Cardiff made it five wins from five against Hartpury 2nds while USW beat Exeter 2nds 21-17. Swansea couldn’t make it a trio of Welsh triumphs as they lost 17-12 against last years’ BUCS Super Rugby play-off finalists Bristol. The other result in South A, saw Bath 2nds beat UWE 48-19.

Strathclyde’s lead at the top of North B has been cut to just a point as they were beaten 38-26 by second placed Leeds Beckett 2nds. Third placed Loughborough 3rds missed the chance to close the gap on the top two as they lost 36-15 to Glasgow while Durham 2nds secured their first triumph of the season after winning 36-18 against Manchester. In South B, Hartpury 3rds were rampant as they waltzed to a 75-5 win over Southampton, but they remain level on points at the top of the table with Exeter 3rds who edged out St Mary’s 35-29.

Newcastle 2nds made it four wins on the spin as they beat Sheffield Hallam 53-15 to move five points clear at the top of Northern 1A. Hallam’s city rivals, Sheffield, are second in the table after a 25-13 victory away at Durham 4ths while Liverpool once again succeeded on the road by beating Hull 41-29.  In Northern 2A, Manchester Met thrashed Liverpool 2nds 45-5, but Rob Jones’ men are still playing catch-up with Keele who beat Lancaster 29-24 to maintain their 100 per cent start to the season.  The other fixture in that division saw UCLan rewarded a walkover result against Bangor.

The race for promotion in Northern 2B is starting to heat up as both Northumbria 2nds and Newcastle 3rds made it four wins on the bounce. Both northeast sides sit on 19 points after wins against Sheffield 2nds (26-19) and Leeds 2nds (33-12). Elsewhere in the division, York narrowly missed out on their first win of the season as they lost 33-31 at home to Leeds Beckett 3rds.

Manchester 2nds moved one point clear at the top of Northern 3A with a convincing 31-7 win over Chester. Following the Cheshire sides’ defeat, Edge Hill moved into second place thanks to a 19-12 victory over Manchester 3rds while Liverpool John Moores beat neighbours Liverpool 3rds 38-10. In Northern 3B, Leeds Beckett 4ths thrashed Sheffield Hallam 2nds 101-7 to continue their perfect start to the season and there was also a big win for York St John as they beat York 2nds 43-17. The other result in this division saw Leeds 3rds beat Newcastle 4ths 20-17.

In the Midlands, Leicester stay top after a 66-14 win over Worcester while second placed Nottingham Trent 2nds picked up an equally impressive 52-12 triumph over Birmingham 2nds. Warwick secured their first win in three matches as they beat Coventry 22-19. From 1A to 2A where Harper Adams made it four wins from four as they beat Nottingham 3rds 37-17. Their Midlands rivals closed the gap to one point as third placed Nottingham Trent 3rds thumped Oxford Brookes 2nds 52-7 and there was another win for Warwick as their 2nd team edged out Birmingham 3rds 24-17.

In the Women’s Premier divisions, reigning champions Edinburgh made it five successive victories as they comfortably beat Birmingham 64-0. After running the BUCS Championship holders close last week, Northumbria could not respond in the way they would have liked as they were beaten 19-10 by Durham. Elsewhere in the North, Newcastle lost 34-12 at home to Loughborough. In the South, Hartpury strengthened their grip on top spot with a 99-0 win over Bristol while Cardiff Met arrested a run of two straight defeats by beating Oxford 33-5.