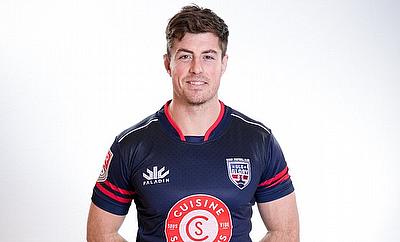 Certainly the player’s stats from the 28-22 victory over the Seattle Seawolves at the Cardinal Stadium during the round two fixture from the top league in the USA are hard to argue with.

With the ball in hand the openside made 15 carries for 143 metres and he broke four tackle breaks. Defensively he made11 tackles and made an intercept that shifted momentum in the match as he sprinted for 50 metres while at the breakdown he hit 28 rucks.

It was just one of a number of top performances from Old Glory players - South African legend Tendai ‘The Beast’ Mtawarira and Jason Robertson also in the team of the week - to help the squad bounce back from an opening day 46-13 thumping loss to NOLA Gold on the road.

They are on their travels again this coming weekend, this time to Houston SaberCats, and Mason is loving life in Washington.

“John Dalziel, my Scotland Sevens head coach in 2018/19, put me in touch with Old Glory DC ahead of the 2020 MLR season and I jumped at the chance to come over to Washington and play here,” the 27-year-old told TRU.

“I came over in the middle of December and it is such a great city, there is so much to do while the group of boys in the squad here are brilliant.

“There are a lot of new faces in the squad for this season and we have had a couple of months to gel now and we are getting there.

“To have ‘The Beast’ here now is obviously insane and he is such a famous player while there is some serious talent in the squad and I am excited by the group that has been put together.

“Even from when I was with San Diego for a short spell two years ago before the first year of the MLR, the competition has just grown and grown and the big names from the world game that are sprinkled throughout the various teams is testament to that.”

Mason’s journey from Carluke to Washington

Mason was born in Scotland in Carluke and his family were there for the fist two years of his life before emigrating to New Zealand and settling there.

“My parents are Zimbabwean and were in Scotland for university, they were there for maybe eight or nine years before New Zealand,” he explained.

“We settled in New Zealand in a town called Tauranga and it was a great seaside place to grow up in and I was there until I was about 18 and moved away to university.

“Whilst in my teens I played both rugby and water polo to a good age-grade level and as I got older it became decision time and I wanted to continue my rugby.

“I loved water polo when I was involved in it and I honestly believe rugby players should play water polo in the off season because it is fantastic for your fitness, ball handling skills and tactical awareness.”

Next up for Mason was studies at the University of Waikato in Hamilton and there he was able to combine his law and international business course with rugby.

“I was there for three years and loved it while being part of the Waikato rugby Academy was great for my development,” he explained.

“It was quite a balance between studies and rugby, but I always wanted a degree behind me and I am really glad I did that.

“There was some serious talent in the Waikato Academy at the time, guys like Damian McKenzie, Atu Moli and Bryn Gatland who have gone on to do well, and it was a great group of guys to train with.”

With his degree, Mason had to study for one year abroad so he headed for Chicago in the USA.

“Whilst there I got linked in with Chicago Lions which was a great social rugby club and then I had had enough of the cold in the city so I moved to San Diego to complete the last three months of my degree,” he said.

Great first game what a fantastic bunch of guys who fought for each other till the end!! let’s do it again next week ??

“When I was in San Diego I got a phone call from the general manager of San Diego Legion asking me to come and trial with them and so I did and played for them for a while.

“It was a great team and great culture there as the first year of the MLR [2018] was approaching, but unfortunately visa issues meant I only played the pre-season games and then had to leave.

“That was frustrating, but thankfully Chris Cracknell, the former England Sevens player who was coaching at San Diego, linked me in with Matt Cornwell, the head of rugby operations at Edinburgh Rugby, and they offered me a two month trial.”

“I really benefitted learning from the likes of John Barclay”

Mason arrived in Edinburgh around May 2018 and did the full pre-season ahead of the 2018/19 campaign before being awarded a contract.

He played in the pre-season friendlies, but the long list of back-row talent at Edinburgh made it hard for him to make matchday 23s as the campaign got underway.

“I really benefitted learning from the likes of John Barclay, Jamie Ritchie, Hamish Watson and others and then I was made a partnership player with the Scotland Sevens set-up too.

“With the sevens set-up I was part of the squad that travelled to the first two World Series events [in Dubai and South Africa in late 2018].

“I was 13th man for Dubai and I was on the bench in South Africa, but then I was going between training with Edinburgh and the sevens set-up and could never fully focus on one.

“I played a game for Edinburgh Accies in the Tennent’s Premiership and then was involved in some tournaments for the select side the PROJECX Waterboys, including the Hong Kong 10s.

“Come summer 2019 there were talks around me staying in Scotland, but I felt like I wasn’t going to make the strides I wanted so I headed back to New Zealand and completed by law degree and played some social rugby before this American adventure came up.”