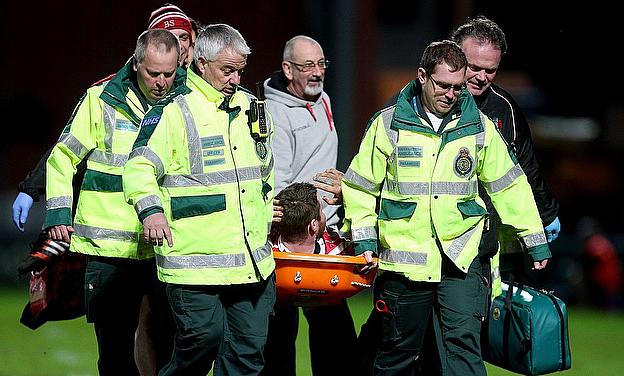 Ben Morgan was stretchered off during Gloucester's narrow win
©PA

England suffered what appeared to be a major pre-RBS 6 Nations injury scare when number eight Ben Morgan was carried off during Gloucester's dramatic 24-23 Aviva Premiership victory against Saracens at Kingsholm.

Gloucester forward Morgan, who was among England's most consistent performers during the autumn Tests earlier this season, suffered an injury to his left leg early in the second half of an enthralling game that was won by James Hook's 50-metre penalty deep into stoppage time.

England kick off their Six Nations campaign in four weeks against Wales in Cardiff and head coach Stuart Lancaster must keep his fingers crossed that Morgan was not seriously hurt.

Referee JP Doyle stopped the game immediately after Morgan was tackled just short of the Saracens line, and a lengthy spell of treatment followed.

There could be more bad news to trouble Lancaster, with Saracens' England lock George Kruis potentially attracting the citing commissioner's attention after he escaped with a yellow card following a tip-tackle on Gloucester wing David Halaifonua.

Fly-half Hook added 14 points from the boot, including his last-gasp clincher, and Saracens had to settle for a losing bonus point after mustering an early penalty try, scores from brothers Billy and Mako Vunipola and two penalties and a conversion from Alex Goode.

Saracens made an enforced late switch after England fly-half Owen Farrell was ruled out by a tight calf, so Goode moved from full-back to deputise and Ben Ransom started at number 15.

Gloucester had originally named an unchanged team from the one that defeated Exeter 26-25 last weekend, but Scotland scrum-half Greig Laidlaw and lock Tom Palmer then both succumbed to a virus and were replaced by Wasps-bound Robson and Elliott Stooke respectively.

Saracens needed just seven minutes to showcase their forward power and Gloucester could not stop it, illegally halting a lineout drive for the second time in quick succession which resulted in Doyle awarding a penalty try.

Goode added the conversion before Gloucester blew a gilt-edged opportunity when skipper Billy Twelvetrees inexcusably ignored an unmarked Jonny May outside him and the try-scoring chance went begging.

Hook, though, cut the gap to a point when he kicked two penalties in four minutes before Goode's opening strike made it 10-6 following an entertaining first 25 minutes.

Goode then increased Saracens' advantage but after Hook saw a penalty hit the post, Robson inspired his team through a sparkling individual try.

He spotted a blindside gap, chipped the ball over Billy Vunipola and then beat Richard Wigglesworth to the touchdown, finishing off brilliantly under pressure in the corner.

Hook failed to convert and then drifted a penalty chance wide on the stroke of half-time after Saracens wing David Strettle had been sin-binned for a deliberate knock-on, and the visitors trooped off 13-11 ahead.

A lengthy stoppage followed while Morgan was treated and when play resumed, Hook's third successful penalty narrowed the gap to 18-14.

Gloucester then conjured a stunning 90-metre score, which was started by May near his own line before Morgan's replacement Gareth Evans took the move on at pace and Braley finished off with a celebratory dive between the posts.

Hook's conversion opened up a three-point Gloucester lead but prop Nick Wood was then carried off following another lengthy stoppage with what looked to be a neck injury.

May received a yellow card when play resumed and had barely left the action before Mako Vunipola touched down, but again the conversion went begging and Hook proved to be Gloucester's hero with the final act.