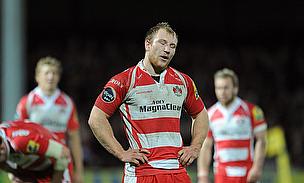 Billy Burns has joined the likes of Matt Kvesic, pictured here in signing a new contract at Kingsholm
©Press Association

Gloucester Rugby have announced the signing of Tom Marshall and revealed that fly-half Billy Burns has signed a new contract with the Kingsholm club.

He is a former New Zealand Under-20 international who has also played for Tasman Makos in the ITM Cup and the Crusaders, as well as the Chiefs, in Super Rugby.

Marshall is versatile enough to be able to play on the wing, at full-back or in the centre and played 56 times for the Crusaders before moving to the Chiefs in 2013.

Meanwhile, 20-year-old Burns, who made his debut for Gloucestershire alongside elder brother Freddie on the final day of the 2013-14 Aviva Premiership season against Worcester Warriors and has to date made 13 first-team appearances.

He is the latest first-team player to agree a new contract at Kingsholm, following Matt Kvesic, Jonny May, Moriarty and Gareth Evans.

"I'm delighted to be extending my time at the club. I've been really pleased with how my game has come on during my time here, and am really excited to continue working with the players and coaches in this squad," he said.

"It's a great honour for me that the coaches believe in me, and a big opportunity for me to continue my learning and development at such a great club."