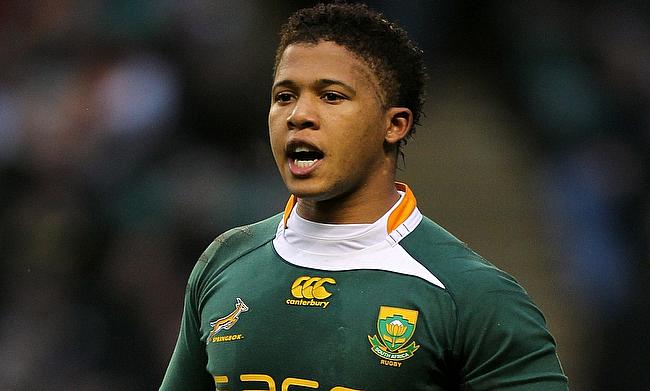 Elton Jantjies will start at fly-half for South Africa
©PA

South Africa head coach Jacques Nienaber has confirmed the matchday squad for the opening Test against Wales to be played on Saturday in Pretoria.

Elton Jantjies will start at fly-half and form half back partnership with Faf de Klerk while Cheslin Kolbe and Makazole Mapimpi are at right and left wings respectively and Damian Willemse at fullback.

Siya Kolisi will captain the side and will be part of the back row that also has Franco Mostert and Jasper Wiese. Vice-captain Lukhanyo Am will form midfield combination with Damian de Allende while Lood de Jager and Eben Etzebeth are the preferred locks.

The front row will see Frans Malherbe and Ox Nché will pack down on either side of Bongi Mbonambi while Salmaan Moerat and Elrigh Louw are set to make their debut from the bench that also has Malcolm Marx, Vincent Koch, Steven Kitshoff, Kwagga Smith, Herschel Jantjies and Willie le Roux.

“We have a talented group of players, and we believe the matchday squad we selected ticks the boxes in terms of what we would like to achieve in the opening Test against Wales,” said Nienaber.

“We have the added advantage of having several players that are quite versatile, so a guy like Damian Willemse for example can cover flyhalf and centre in addition to fullback, while Kwagga covers each of the loose forward positions and can even slot in at wing with his Blitzbok experience.

“Franco also gives us options at loose forward and lock, so we look forward to seeing what this team can produce on Saturday.”