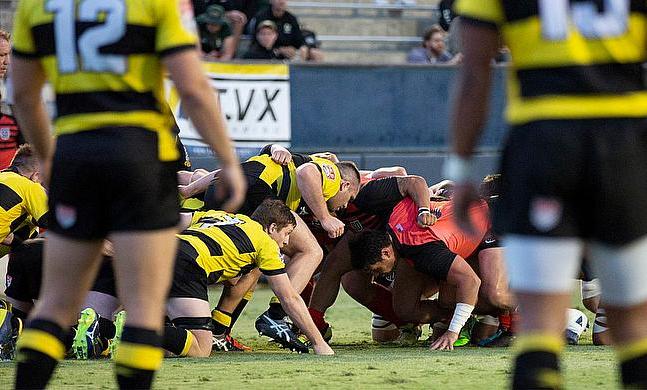 Both of these teams went into this game following wins in the previous week, setting up an exciting encounter at Round Rock. This was Austin’s second home game in two weeks and following their resounding victory over San Diego, they would have fancied their chances against a Utah side who aren’t quite in full-flight yet.

It was Austin’s Alex Faison-Donahoe who opened the scoring for the day. The 25-year-old’s try allowed former Agen fly-half, Timothee Guillimin, to open his account for the afternoon. Unfortunately, Guillimin was unable to convert Faison-Donahoe’s try, but did score a penalty not too long after.

Utah then got a foothold in the game as Tonata Lauti scored his sides first try of the afternoon. Utah were without regular fly-half Kurt Morath, leaving Johnny Linehan with the kicking duty. However, the former Brigham Young University student missed his first shot at goal.

Soon after Austin hit back. Exciting full-back Zinzan Elan-Puttick scored a mesmerising try on the day that he would be crowned man of the match. Guillimin failed to convert this try.

The final 10 minutes of the half got a bit exciting. Utah scored a try through AJ Tu’ineau, one of Utah’s local products, and allowed fellow rookie Johnny Linehan to open his scoring in the league with a conversion. Austin replied soon after when former Springbok, Pedrie Wannenburg, powered over the line and gave Guillimin another conversion to score.

Austin begun the second half in the same manner that they had started the first; Elan-Puttick scoring another brilliant try that Guillimin converted. The Austin onslaught wasn’t over though as scrum-half Marcus Walsh sniped through to score a second try in two weeks. His French teammate, Guillimin, was unable to convert.

It was Glasgow-bound David Tameilau who tried to mount a comeback for Utah. The big number eight bundled over the line to bring his side back in contention and Linehan was able to convert this try. Austin began to show they had good game management when taking two penalties in good positions to extend their lead.

Austin won the game 41-33 and are finally proving that they are capable of a tilt at the MLR title. Utah, however, seemed to have struggled without their best players questioning whether they have the depth to realistically challenge for the league.

The Seawolves blew NOLA out of the water last weekend in Seattle. Arguably the best side in the league, they possibly would have expected to rollover a struggling SaberCats side who haven’t performed as they would have liked for the last few weeks but that wasn’t the case.

The first half was something of a dull affair. Houston were resolute in their defence but didn’t have too much to offer in their attacking play. Seattle had the better of this half though. They were brilliant in defence but were largely unable to breakdown the SaberCats.

Seattle did get their noses in front though as Brock Staller scored two penalties after Houston made infringements that the better sides in the league haven’t been making.

The second half was slightly more exciting. Sevens circuit veteran Peter Tiberio scored for the Seawolves and allowed Canadian Brock Staller to get more points off the tee.

A mere seven minutes later and another Canadian got in on the points scoring action. Player/coach Phil Mack darted over the line to essentially secure the win for his side. His countryman, Staller, converted the score and his clubs last points of the afternoon.

The SaberCats did eventually get some points on the board. Big Irish lock Charlie Hewitt, a former Worcester academy player, scored his first try for Houston. Sam Widsor, arguably the league’s best fly-half, got two points from the tee after his teammates score.

The final score was 20-7 in Seattle’s favour. It was an extremely reserved day for Houston. The result means that the SaberCats sit at the foot of the table and are the only side not on double figures in term of their points. Contrastingly, Seattle are top of the pile, separated by one point from Glendale who still have a game in hand.

Having not played since mid-May, Glendale were certainly well rested going into this fixture. Playing the league’s best rugby before their break, fans were unsure if the Raptors could pick up from where they left off. In contrast, NOLA have been inconsistent throughout and may have been the best opposition for the Raptors to re-enter competition.

The opening 20 minutes displayed that Glendale had no cobwebs. In the fourth minute, prop Blake Rogers bustled over for his sides first try. Will Magie converted and before too long, he was on kicking duties again following Mikaele Kruse’s try. However, Magie was unable to convert after his international teammate Dylan Fawsitt scored the Raptor’s third try.

All NOLA could muster in response to their onslaught was a Joey Sok try that went unconverted. This proved that Glendale are the side to look out for in the coming weeks.

The second half was pure domination from Glendale. It began with a Magie try that he duly converted. Not too long after, replacement hooker Zach Fenoglio scored and Magie converted the score yet again.

This Glendale dominance was only briefly put on hold when NOLA fullback Cameron Troxler scythed through the Glendale defence. Unfortunately, this try would not stem the oncoming tide as the Raptors were quickly on the front foot yet again.

Back-row Sauel Figg scored his second try in the MLR. Magie got the extra two from the tee, although the victory was already secure. Glendale’s final try was scored after the clock went red though Bryce Campbell.

The 23-year-old, who has just been called up to the USA squad for their upcoming internationals, has been very impressive throughout the season. Magie converted the try in the last act of the game to secure Glendale’s 47-10 victory.

This weekend’s fixtures left Seattle on top and Glendale close behind. Austin moved into third as Utah remain fourth. Next weekend will see Seattle stay in Texas where they will play Austin in what looks to be the game of the round. A deflated Houston will travel to Glendale on their return to their home ground whilst, NOLA will host San Diego as both of these sides battle for a play-off spot