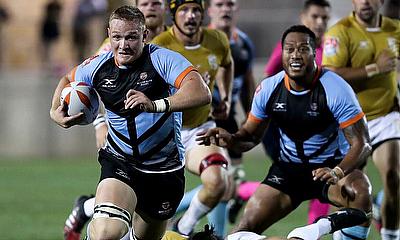 Yet again fans of America’s new rugby competition, Major League Rugby, were treated to an exciting display of rugby. Last week, the competition started on Thursday in Texas….

New Orleans came back to the competition following their fallow week in the last round as they visited an Austin side who were in the hunt for their maiden league win of the season. Playing for the first time at home, Austin finally left their losing streak behind them, beating the Gold 30-17.

“We are very excited about the inaugural season of @usmlr and very proud of our players and coaches. Our match last week against @nolagoldrugby was fast paced and full of action. We look forward to the rest of our games and earning a spot in the playoffs.”
C.Bugge & R.Osborn. pic.twitter.com/SrX0soUjOO

Within five minutes, former Agen man, Timothee Guillimin, had scored two penalties before Englishman Ned Hodson went over for a try. From here, NOLA began to find their footing in the game. JP Eloff started the scoring for the Louisiana side, scoring a penalty. Then New Yorker John Sullivan scored a try for his side, with Eloff converting to make the score 10-11 at half time.

Four minutes after the interval, Hanco Germishuys scored what would be his first try of the day. This score wasn’t converted. John Sullivan found himself on the scoresheet again with yet another try for the flanker, Eloff converted yet again. It was from here that Austin pressed on. Germishuys scored another try just several minutes before Ned Hodson, a former Munster academy player, scored another try. Guillimin converted both tries, securing Austin’s first league win in the MLR.

Houston came into this game fresh faced after their derby day victory over state rivals Austin, but failed to build on their victory last time out. San Diego were playing at their home stadium, the Torero Stadium, for a second consecutive week and wanted to build their confidence going forward.

After back to back victories at home, we’re hard at work preparing for next weekends's match in the undefeated @glendaleraptors territory! Where are our #Colorado #SDLEGION supporters at?#team #sports #sandiego #wearelegion #rugby #mlr pic.twitter.com/zUv7G4XjSR

The visitors started the better on the day though. Former Fiji sevens star Osea Kolinisau scored another try to add to his tally this season. Australian fly-half Sam Windsor converted the try and a minute later, added a penalty. In what was a try-laden first half, San Diego then struck with two Anthony Salabar tries in quick succession. USA international Dylan Audsley converted both of the tries. The game soon became the Sam Windsor show. The Aussie scored a penalty, a try and a conversion in the space of seven minutes. However, it was Salabar who had the last laugh, completing a first half hat-trick, with Audsley converting the score, making it 21-20 at the interval.

Sam Windsor restarted the scoring in the second half with a penalty. Pat Blair then scored a try for the Legion and Audsley continued his good kicking form by converting Blair’s try. Windsor then kicked two more penalties, before Kolinisau opened up his bag of tricks to land a drop-goal for the SaberCats. The Legion won the game after SaberCats number eight, Pago Haini, was put in the sinbin on the 80-minute mark. The Californians pressed on to score a try through prop Tony Purpura, then Audsley calmly added the two points to make the score 35-32 to the Legion at the final whistle.

Utah played a home game for the first time in the MLR. In what was only their second game in the league, Utah welcomed the Glendale Raptors and they were feeling good after two consecutive wins so far in the league season.

In what was a tight affair in Herriman, the first half ended 10-10, with both sides scoring converted tries and a penalty each. Former University of Leeds student and US fly-half Will Magie bagged the points from the boot for Glendale, as his teammate Samuel Figg scored the opening try of the game. For Utah, Tongan Kurt Morath scored both the penalty and conversion for his side, as prop Angus MacLellan added five points for the Warriors.

Harley Davidson was our last Raptor of the Match. Who will get the title this week? Get your tickets now to find out: https://t.co/XtS1BiUNF6 pic.twitter.com/BigfoHNU6W

The second half was infinitely more fascinating to watch. Warriors were straight out of the blocks with a try from Fetu’u Vainikolo, the former Highlander scoring his first try for his new club. Morath converted his international teammates score. It wouldn’t be a Glendale game without Harley Davidson scoring a try, and the back did just that as he dotted down in the 48th minute try. Peter Dahl then got in on the action for Glendale, as the flanker touched down and Magie got himself another two points. Tonata Lauti then got involved in the action as he scored two tries in the space of five minutes. Morath missed one of his two conversions.

Glendale looked down and out, until Bryce Campbell went through to give the Raptors faithful hope. Magie kicked his conversion. It was Mikaele Kruse who had the final say, scoring the try that saw Glendale become the only side to have a 100% winning percentage in the MLR after sealing a 36-29 win.

It was Seattle who had a week off during the last round. However, they will be on their travels for the first time on Saturday, when they take the trip to New Orleans who will be playing their first home game. San Diego have a daunting journey to Glendale who are the ones to watch after their blistering start to the tournament. Finally, Austin go to Utah, looking to build on their victory in the last round.