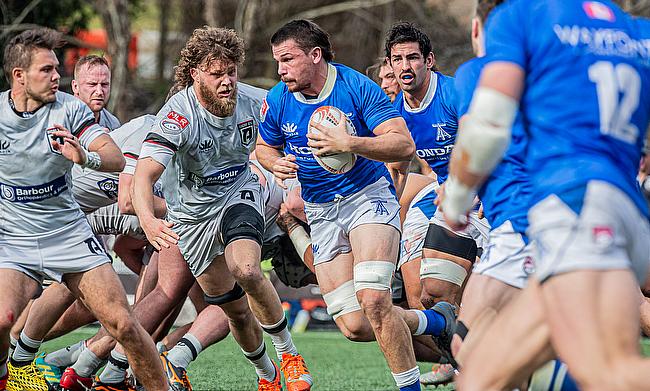 Toronto had to overcome a strong Rugby ATL side
©Ayalas Photography

After another weekend in which there were surprises, great tries and legends of the game in action, Talking Rugby Union’s Joe Harvey brings you the latest from Major League Rugby.

At the top of the standings, San Diego continued their unbeaten start to the season with a 25-21 win on the road against NOLA Gold. The hosts opened the scoring with a try from Moni Tongauiha that was converted by Carl Meyer. Going into half-time as 21-12 leader, it took two second half penalties from Joe Pietersen and a converted Ma’a Nonu try to give Legion the win.

Old Glory carried on their good form as they beat an improving Austin Gilgronis side 28-19 in Texas. This was largely thanks to the boot of New Zealander Jason Robertson, the fly-half kicking 13 of his side’s points. Tries were also scored by Danny Tusitala, Doug Fraser and Renata Roberts-Te Nana.

The final game on the Saturday saw the Colorado Raptors take on Utah at Infinity Park. The home side eventually won 22-14, getting them off the mark for 2020. Rene Ranger received the player of the week award for his performance against the Warriors, scoring two tries and using his experience to take the Raptors over the finish line as they collected four points.

Congrats to Mason Emerson and Rene Ranger on being named to @usmlr's First XV in Round 4!

On top of his selection to the First XV, Rene Ranger was also named MLR Player of the Week!#ColoRaptors pic.twitter.com/eyCucC5UJ6

On Sunday, champions Seattle also got their first win of the season as they beat a strong New England side 44-29. Nakai Penny was extremely influential in the forward pack, defending well and even pinching a try for himself and Argentine-born US international Ben Cima orchestrated things in the 10 shirt for the Seawolves.

The Toronto Arrows maintained their unbeaten start in 2020 thanks to a win over Rugby ATL in Georgia. It did not go all the Arrows' way, though. Losing 11-7 at half-time, it took second half tries from the club's South American contingent, Tomy de la Vega, Leandro Leivas and Gaston Mieres, to eventually get the 28-18 win on the road.

Rugby United New York are starting to look back to their best as well after beating the Houston SaberCats 31-23 in Texas. A dominant first half saw Greg McWilliams' side run in three converted tries, with a solitary Sam Windsor penalty providing the Houston response. In the second half, the hosts took the lead, Windsor scoring 15 points, but a Cathal March penalty and converted Marcus Walsh try meant that New York took all possible points home.

Opening this weekend’s slate of fixtures are unbeaten Toronto as they travel to Colorado. The Raptors only got their first win of the season last weekend against Utah, so will no doubt be hoping to build their confidence after a torrid start to the season. For the Canadians, the task is simple; Keep that ball rolling and make it five wins from five.

New England’s opening weekend win over New York has really been the highlight of their season so far. Being competitive in each of their subsequent games, all of which they have lost, the Free Jacks play an extremely good NOLA Gold side this weekend that will still feel unlucky to have lost out to San Diego last time out.

Texas will see it’s first derby game as Austin and Houston meet in the West Conference. Two points separate the two sides and with the state bragging rights on the table, this is pretty much guaranteed to be one of the most exciting games of the league season, regardless of positions in the standings.

Elsewhere, Seattle host Utah on the West coast. Having finally won a game, you can bet your life on Kees Lensing’s side wanting to build on their season’s maiden win and they come up against a Utah Warriors side whose form has not been as consistent as Head Coach Chris Latham would have liked.

Off the back of their second loss of the season, Rugby ATL travel to an Old Glory side that are currently fourth in the overall standings. With three points separating the two new teams, Old Glory are proving themselves to be good game managers, whilst ATL are one of the most tightknit groups in the competition.

The final game of week five will see New York travel to California in order to take on San Diego. The encounters between the two sides were quite intoxicating last season, so there is no reason to expect any different when the teams meet this Sunday. Both in the top four, this has the potential to be the game of the weekend.