Mixed results for top teams as efforts were focused on Europe 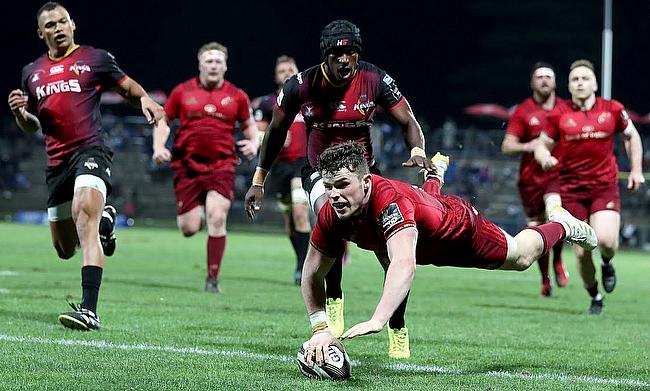 Calvin Nash crossed for Munster in the first half
©PA

Rounds 18 and 19 threw up mixed results for the Pro14’s European contingent as Leinster, Munster and Scarlets focused their efforts on reaching the European Champions Cup semi-finals.

Munster put away Scarlets at home with a 19-7 victory before travelling to South Africa to record a 39-22 win away at Southern Kings. Scarlets followed up this loss and their outstanding European quarter-final win with a convincing 26-8 win over Glasgow Warriors at home.

Leinster meanwhile rested players for the trip to Ospreys in Round 18 and paid the price with a 32-18 loss. The Conference B leaders will have considered it a necessary evil in order to keep players fresh for their win over reigning European Champions Cup holders Saracens. After booking their place in the semi-final they easily dispatched with Zebre on their return to league action, coming away with a 41-6 win at home.

Elsewhere it was mixed fortunes for Edinburgh who triumphed 29-22 away to Connacht before succumbing to a 32-20 loss at home to Ulster who will still be hoping to catch them. Ulster had lost 35-17 to Cardiff the previous week but must believe the win can spark a late run of form to guide them into the play-offs. Cardiff then travelled to the Cheetahs but lost 29-27 in South Africa.

That win capped a good two weeks for the Cheetahs who had travelled to Dragons and won 29-17 in Round 18. Dragons followed this loss up with a further defeat away to Benetton Rugby, with the final score 29-27 in favour of the Italians. That made it two wins in two for Benettion who narrowly defeated South Kings 36-35 the previous week in South Africa.

Ospreys completed a Irish double after defeating Connact 39-10 at home to follow up their impressive victory over a depleted Leinster side. Glasgow hammered Zebre 68-7 at home in to complete the Round 18 and 19 fixtures.

Despite their defeat Glasgow remain top of Conference A on 70 points while Munster sit in second, seven points behind and having played a match more. The Cheetahs are in third place in their first season in the league while Cardiff Blues are fourth and fellow Welsh side Ospreys are fifth. Connacht lie in sixth after a miserable season while Zebre prop up the table in seventh.

In Conference B leaders Leinster are four points ahead of Scarlets in second while third-placed Edinburgh hold an eight-point advantage over fourth-placed Ulster who do have a game in hand. Benetton Rugby are fifth, Dragons are sixth and Southern Kings remain bottom of the table in seventh.