May and Laidlaw put Exiles to the sword 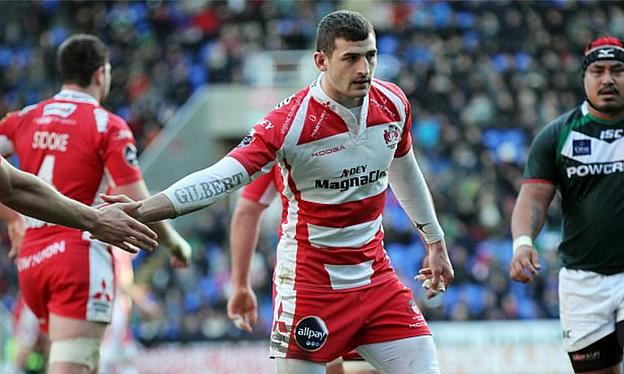 Greig Laidlaw kicked 20 points in a man-of-the-match performance on Saturday afternoon as Gloucester beat London Irish 35 – 13 at Kingsholm in the penultimate round of the Aviva Premiership.

The newly crowned Challenge Cup Champions were reduced to 14 men after flanker Matt Kvesic received a red card after just 23 minutes for an illegal tackle on Tomás O’Leary.

But despite the Exiles being camped on the Cherry and White’s line for the opening half hour they could not turn pressure into points, having two attempts held up over the line.

Gloucester were the first on the board after Laidlaw converted his first of six penalties but it was London Irish who scored the first try of the game. Shane Geraghty, on his first start in three weeks, put Alex Lewington away for the winger to cross for his 11th Premiership try of the season.

Gloucester found their stride just before the half time break. A try of their own for Jonny May, collecting clever chip over the Irish defence, and a second penalty from Laidlaw left Irish facing a 12 point deficit as they headed down the tunnel at 15 – 3, and down to 14 men of their own as Eamonn Sheridan was sent to the sin bin.

The second half saw Gloucester put London Irish to the sword. Grieg Laidlaw converted another four penalties, with Chris Noakes only adding one for the visitors before their task was made harder by Dan Leo receiving a second yellow card in two games.

It was then two quick fire tries that toped off a fine Gloucester display. First the pack rumbled their way over in the corner for Dan Thomas to score before the backs showed their class, Henry Purdy crossing in the other corner.

With the scores at 35 – 8 London Irish looked dead and buried, but just as they did at the Rec on their last outing, it was the Irish who had the final say of the game.

After building a foothold in the Gloucester 22 the final play saw them ship it wide to Andy Short, making his debut for the club, who found himself in space to dive in a the corner to leave the final score at 35 – 13.

This was little consolation for Glenn Delaney’s men, the result leaving them just three places from bottom in the table.

For Gloucester, any questions of a Challenge Cup hangover were certainly put to bed, a fine performance that will give them plenty of confidence looking forward to the Champions Cup play-offs.

“Jonny has the x-factor that very few players, not just in England but in World Rugby, don’t have; he can bring something to a game,” said Gloucester Director of Rugby David Humphreys.

“Not that the game was drifting today but a couple of flashes of brilliance from him, obviously one scored a try, it brings confidence to the team.

“You just need to look at Jonny’s performance over the last few weeks, if there are better wingers in England than he at the minute I would be interested to know who they are.

“Finishing 2015 unbeaten at Kingsholm, for me, gives us a little foundation for next year .

“No one can question the character of the squad. Last year it was said by James Simpson-Daniel that the players lost Kingsholm, but if you have been here the last few weeks you can see that is no longer the case.”

“When we look back at it we are disappointed at the accuracy,” London Irish Head Coach Glenn Delaney sad after the game. “That has to improve, we can’t do all the lead up work and then not do the finishing piece. That was the Achilles heel today, a lack of clinical finishing.

“We had an avalanche of penalties against us, they kept coming and what you do find is, and we have seen it a few times this season, when a red card happens the momentum shifts and sometimes it shifts in favour of the team with 14.

“He [Laidlaw] is a great kicker, you can’t give those penalties away, what is does is destroy any momentum you have.

“If you give 15 pieces of possession off starter phase back to the opposition the pressure comes back on you.

“They played brilliantly in broke field scenarios and they created a couple of those so I don’t think we should take anything away form the way Gloucester played with 14, they were very impressive.”