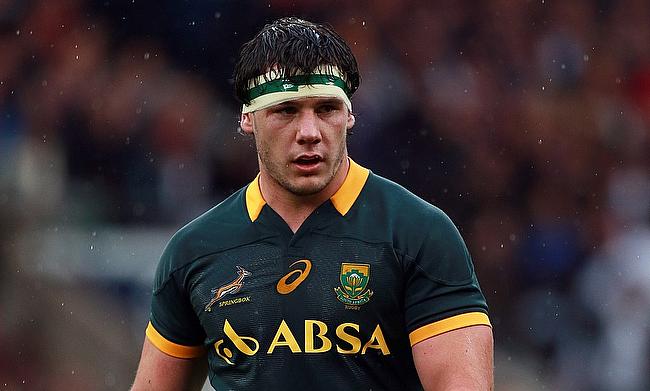 Marcell Coetzee starred for Ulster in their win over Zebre
©PA

Marcell Coetzee scored four tries as Ulster dominated Zebre 14-57 in the sixth round of Pro14 at Stadio Sergio Lanfranchi on Monday.

This is Ulster's sixth win from as many games as they are at second place in Conference A while Zebre are at bottom after losing their fifth game.

Coetzee continued their impressive run this season as he scored the opening try in the sixth minute and Bill Johnston kicked the conversion to take the visitors to a 0-7 lead.

The response from Zebre came in the 11th minute as Pierre Bruno touched down that Antonio Rizzi improved as the scores were levelled. The Irish side seized the lead once again with Coetzee's second at the back of a driving maul in the 25th minute that Johnston improved to make it 7-14.

As the half-hour was approaching, Michael Lowry's offload sent Stewart Moore over the line and Coetzee completed his hat-trick before the half-time as the opening half ended with a 7-26 lead for the visitors.

Ulster stepped up the gears in the second half with Johnston and Luke Marshall dotting down in the 46th and 50th minutes. Johnston kicked both the conversions as well as the scoreline became 7-40.

Even though Zebre managed a try from Nicolo Casilio after a quick tap-and-go which was also his first score since returning from a hip injury but Coetzee's fourth in the 59th minute followed by tries from Ethan McIlroy and David Shanahan in the final six minutes saw Ulster complete a 43 point victory.