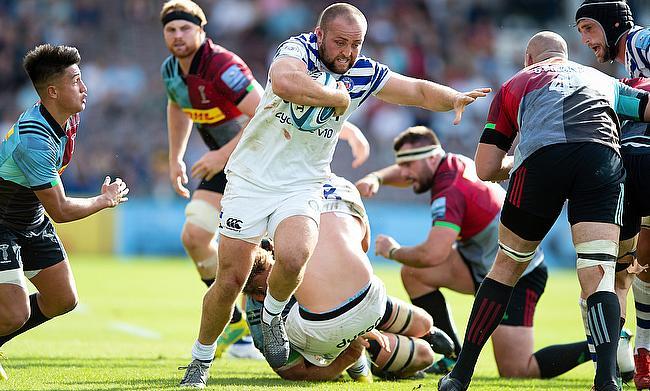 It was Leicester that started the brighter in this game. Two early penalties from fly-half Johnny McPhillips made you wonder if this young Tigers side were cohesive enough to pull off an upset against a Bath outfit laced with international stars.

That reality would prove short-lived, though. After Leicester’s second penalty, Bath began to gain a strong foothold in the game, their backs being combative with their runs which seemed to liven up their forward pack, who up to that point, had made several errors.

Continually putting the home side under pressure, Bath eventually scored the game’s first try, tighthead prop Will Stuart crashing over the whitewash. Rhys Priestland slotted the conversion and repeated that task six minutes later when his forward pack produced another strong maul that put Tom Dunn across.

The Welsh fly-half wouldn’t be able to convert Ruaridh McConnochie’s quite remarkable try. It was Anthony Watson who carried strongly first before the ball found its way to the former England 7s man. A drifting run allowed him to then dive into the corner to score.

Bath would go into the break with a 20-point advantage thanks to Lewis Boyce’s try. After some kicking tennis, Tigers struggled to organise themselves, leading to the prop strolling over to dot down. Priestland converted.

Over 10 minutes of the second period passed by before there were any further scores. Leicester seemingly had regained some confidence from the half-time team talk but following some replacements, Bath were renewed as loosehead prop Beno Obano added another try for the front-row union to be proud of. Priestland could not convert on this occasion.

Bath’s next try was special. Recently on the field, a mulleted Josh Matavesi received the ball and instead of shipping it on, the Fijian threw a dummy. Such was the effect of that, the former Falcon strolled through, unopposed before meeting a green shirt and flinging the ball to fellow replacement Tom de Glanville who scored under the posts. Ben Spencer converted the try with Priestland being replaced.

Following the sin-binning of Wales international Taulupe Faletau, Leicester finally gathered some momentum. A series of mauls and scrambles on the Bath try-line eventually resulted in replacement hooker Charlie Clare being driven over to make the scoreline a little more respectable. Former University of Bath man Zack Henry could not convert meaning that any glimmer of hope for the hosts was all but gone.

Tigers would finish the game with another try, though. With Bath's remaining starting players looking tired, the waves of attack from the hosts eventually proved too much for them as Luke Wallace gathered an offload from wing Harry Simmons to cross, but Henry was unable to convert.

The odds were always stacked against Leicester for this game. Having made a large number of changes to play the club's young talent, Steve Borthwick would have been going into the match knowing that he would learn a tremendous amount about the youth in his squad as well as the fringe players and maybe even some names he is considering the future of.

On paper, the difference was clear with the Tigers starting four fully-fledged internationals to Bath's 10. Of course, there were moments for the home side early on as they dominated on the ground before Bath's experience shone through. Leicester is a rebuilding job, everyone is aware of that. As Borthwick has said himself, just being a Leicester player does not make it your right to think the playoffs or trophies are a given.

Of course, there were some positives. Number eight Thom Smith seems like he could really be a handful when he develops a bit more and he could be part of that crop of new homegrown talent to take the club forward. Mike Ford's defence looks close to being there and in truth, it most likely was a lack of cohesion leading to some of the Bath scores, as well as their individual brilliance.

Now, on to Bath. Who would have scarcely imagined that after a five month break, they would have come back with such a forward dominance based game. Likely to be the invention of Head Coach Stuart Hooper, it was the control of their scrum, and in particular, their driving maul that saw the boys in Black, Blue and White take a bonus-point victory back home.

Ben Spencer has seemingly come to The Rec and slotted in superbly. He has been a great barometer for the side, dictating pace well with his established kicking and passing game. Having only been a bit part player in previous England campaigns, the scum-half has really put his hand up these last two weeks and he put on a show in front of Eddie Jones at Welford Road today.

Whilst making very few changes, Bath had a lot of consistency still remaining from their win against London Irish. One player who came in brilliantly for Hooper was mid-season signing Cam Redpath. Leaving Sale after disappointing contract negotiations, the versatile back made it clear that he has a point to prove with some hard runs and good hands.