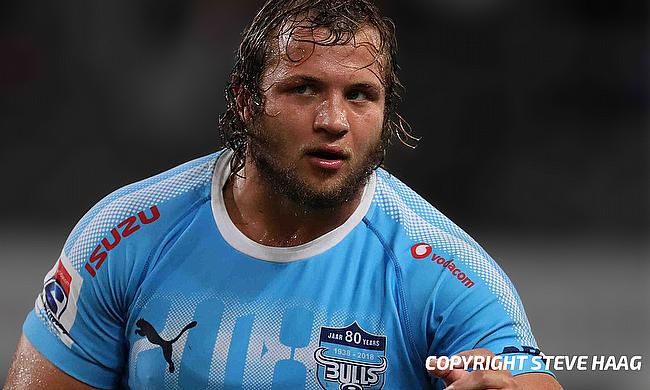 Pierre Schoeman scored a try on his debut
©Steve Haag

Kyle Steyn scored four tries as Scotland dominated the autumn international opener with a 60-14 win over Tonga at Murrayfield Stadium on Saturday.

The Dark Blues scored a total of 10 tries as they built from their 36-9 lead at the end of the opening half and went on to score 24 more points after the break.

Rufus McLean impressed on his debut as he grabbed on a loose ball to score the opening try in the 7th minute and Blair Kinghorn kicked the conversion to take them to a 7-0 lead.

The response for Tonga came in the 13th minute after Scotland were penalised for not rolling away and James Faiva kicked a 40m penalty goal to make it 7-3. Nevertheless, the Dark Blues doubled their tally by the 15th minute when Mclean collected a pass from Kinghorn to touchdown with the fly-half also following with the conversion making it 14-3.

Even though Faiva with his second penalty goal in the 21st minute reduced the gap down to eight points after Scotland were penalised for not rolling away, Steyn scored his first of the four tries after grabbing a pass from Sione Tuipulotu in the 22nd minute. Faiva kept the visitors in the game as he kicked his third penalty from close to the half line to strike between the posts.

The fourth try for Scotland came in the 31st minute as Pierre Schoeman on his international debut powered his way over the line and Kinghorn was once again spot on with the conversion making it 26-9. Scotland had a dominating finish to the opening half with Steyn scoring his second in the 33rd minute after a fine pass from Ali Price and five minutes later he finished his hat-trick riding on a cross-field kick from Kinghorn.

Townsend's men went into the break with a 36-9 lead and they were the quickest to get off the block with George Turner dotting down in the 51st minute at the back of a rolling maul making it 41-9. Tonga eventually showed some resilience as their opening try came in the 58th minute with David Lolohea crossing over but with no further breakthroughs from the visitors, Nick Haining (70'), Nick Haining (78') and Steyn (80') scoring further tries for Scotland as they completed a massive 60-14 win.