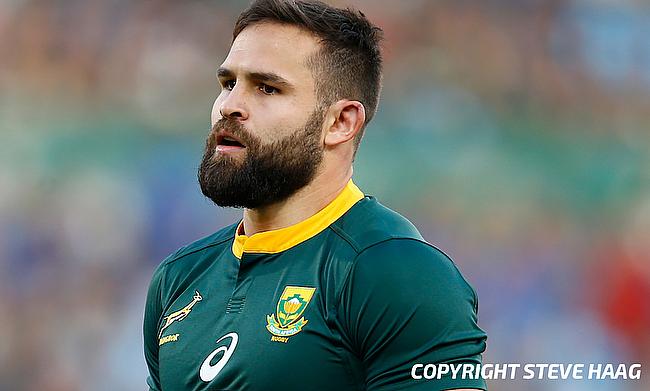 Cobus Reinach was one of Montpellier's try-scorer
©Steve Haag

Glasgow's Heineken Champions Cup campaign ended as Montpellier edged out Exeter Chiefs 37-26 in the fourth round at GGL Stadium on Sunday.

The result meant Montpellier secured 10 points as they finished seventh in Pool A and will be facing Harlequins in the round of 16 while Exeter finished sixth and will be lining up against Munster in the next round at Thomond Park.

Sam Simmonds got Exeter off to a flying start as he dived over the line inside the first three minutes that came following a maul from just over 10 metres out. Joe Simmonds though missed out on conversion.

Nevertheless, it was total domination from the French side as they went on to rack up three tries in a span of 10 minutes. First it was Anthony Bouthier, who crossed over following a break produced by Gabriel N’gandebe in the 12th minute. Five minutes later it was Paul Willemse, who powered his way over after a powerful Montpellier maul.

The start of the second quarter saw centre Jan Serfontein crossed in the corner while fly-half Louis Foursans kicked three conversions and a penalty goal as they raced to a 24-5 lead but Sam Simmonds kept Rob Baxter's men in the game with his second that came around the half-hour mark and at the stroke of half-time Sean O’Brien picked off a stray pass to run clear and dot down which meant the opening half ended with a 24-19 scoreline.

Exeter started the second half in a similar fashion to first and it was once again Sam Simmonds, who completed a hat-trick continuing his excellent form and Joe Simmonds' conversion meant Exeter were into the lead for the first time in the game.

A second penalty kick from Foursans in the 66th minute put the French side into lead once again before Cobus Reinach intercepted a pass and showed his brilliance to dot down in the 69th minute. Replacement Paolo Garbisi, who kicked the conversion also landed a penalty in the closing stage to steer Montpellier to a 11-point victory.